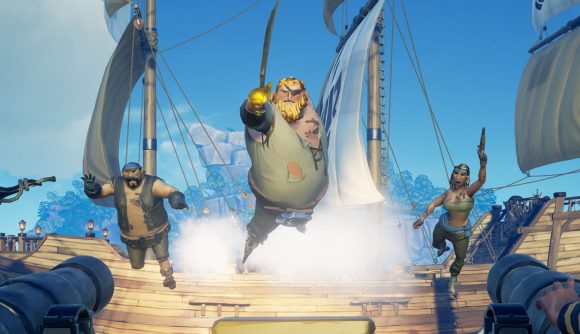 Sea of Thieves is the next game to feature in Twitch Rivals, and it’s been announced that the upcoming tournament’s swashbuckling prize pool is $100,000 USD (£79,000). No pirate in their right mind would miss this opportunity to plunder some major booty.

Twitch Rivals is a series of competitions that are designed for streamers to participate in. Each event focuses on a particular title, and players will have to compete in certain challenges to receive prizes and exclusive game content. In the past, the tournament has Rivals has teamed up with hundreds of games, from Apex Legends and Dota 2 to Teamfight Tactics and even Stardew Valley.

With the Sea of Thieves prize pot sitting in the hundreds of thousands, whatever crew wins will be able to live out their days sailing on tropical seas. Getting first place in any Twitch Rivals competitions can earn you a pretty penny.

Looking at the most recent events from this month, the prize money for first place has been around the thousands, first place in the recent Mortal Kombat 11 Tower Challenge was $7,700 USD (£6,000) and in the Magic the Gathering Team Draft Challenge it was $6,000 USD (£4700). Twitch Rivals also held a $125,000 Teamfight Tactics competition with the player winning in first place receiving $8,373 USD (£6,600).

It’s not only the participants that can get some pirate treasure, as viewers who watch the stream will receive in-game items for Sea of Thieves. Watching on the 23rd grants you the Obsidian figurehead and Obsidian skull, while those watching on the 24th will receive the Obsidian sail and Obsidian flag. To get these rewards you’ll have to sign up to Twitch Rivals which you can do over on their official website.

At E3 earlier this year, producer Joe Neate announced that Sea of Thieves player count topped 8.4 million after the Anniversary update meaning that there will be plenty of fearsome foes on the waters.