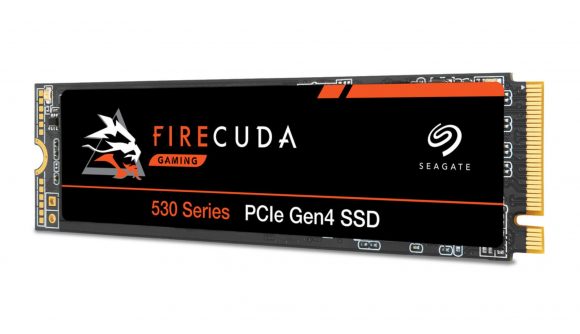 The latest consoles from Sony and Microsoft are ever closer to gaming PCs, with their x86 AMD architectures and NVMe-based solid state drives. As the PS5’s internal SSD already had sky-high performance, Sony has only just found an NVMe drive that suits its strict requirements – Seagate’s new Barracuda 530 PCIe 4.0 drive.

The sequential read and write speeds of 7,300 MB/s and 6,900 MB/s respectively beat some of the current best SSDs for gaming, and as it’s just a standard M.2 fitment, it’s worth considering for your own gaming PC, not just the PlayStation 5.

While it’s the only option for PS5 players for now, the MSRPs for each capacity leave a bit to be desired for PC users. The drive will be available in 500GB, 1TB, 2TB, and 4 TB capacities, with prices of $149, $249, $549, and $999 respectively. The 1TB model is slightly more expensive than similarly performing rivals like Samsung’s $229 980 Pro and WD’s $229 SN850, but it’s worth noting that these two are frequently and currently discounted below the $200 barrier on Amazon.

A discount for this drive seems unlikely right now, especially when demand from PS5 users will be high upon its release.

This could be the start of a much greater selection of PCIe 4.0 SSDs for PCs, however. There aren’t many options to choose from right now, but the PlayStation 5’s demanding requirements could help bring many more high-speed Gen4 SSDs to the market for PC builds too.