With just a glance at a screenshot, it’s instantly obvious that a lot of effort has gone into Seasons After Fall. A gorgeous, painterly affair, its woodland evokes the likes of Ori and the Blind Forest and games from the ever-beautiful UbiArt engine. It’s been a labour of love for developer Swing Swing Submarine; one that’s had some setbacks, but is now on track for release this year.

Looking for more artistic darlings? Try one of the best indie games.

Development started in 2009, but problems with cash flow and the studio’s experience level caused the game to be put on hold. Years later, a deal with publisher Focus Home Interactive put the train back on the rails, and now release is just a few months away. But despite coming to us this year, Swing Swing Submarine have kept the real details of Seasons After Fall close to their chest. All we really know is it’s a game where you play a fox.

“You don’t really play the fox!” laughs William David, Seasons’ designer. “That’s one thing we’ve never said before. You actually play a spirit and you will possess the fox.”

“The game is not really about a cute fox in a forest doing cute things with big gardens,” explains David. “It’s more melancholic. There is something wrong in the forest and you will have to explore to understand it.”

Playing as a spirit during the opening section of the game, you’ll enter the body of the fox and imbue it with the power of the Guardians, making said fox magical and introducing the main mechanic: manipulation of the seasons.

“You will be able to switch between the four seasons at any time. Changing seasons will change the behaviour of elements like plants, water, and the natural stuff around you,” reveals David. “In water you can swim but you can’t jump. If you need to access a platform that is high up you can change to winter, freeze the water, and then you will be able to run across the ice and access the platform.”

The seasons affect everything within the game world. Various plants will flourish at certain times of the year, so jumping forward to fall will see mushrooms sprout from the forest floor. Between seasons flora may behave differently: David teases a puzzle that involves a snow-munching plant. The forest is also inhabited by strange, alien-like creatures, and understanding how they behave and react to the changing of seasons is core to the experience. 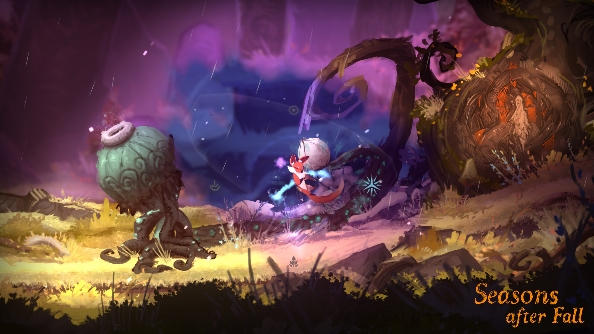 It’s important to note that while the creatures in the forest may be adversaries in terms of blocking your exploration, they’re not there to harm you. Seasons After Fall has no combat at all, and no enemies to speak of (at least in the traditional videogame sense). It’s a cerebral game focussed on telling a story and experiencing emotion, with little to distract from that.

“It’s an exploration game,” emphasises David. “You will need to revisit older areas and find new ways to use the seasons. We have some puzzles, but they are not very difficult. Once you have understood how an element works it’s quite easy. But most of the time because we are really focused on the story.”

The vision of the project sounds similar to that of Never Alone, but David notes Brothers: A Tale of Two Sons as a marker for the sort of game Swing Swing are looking to make. 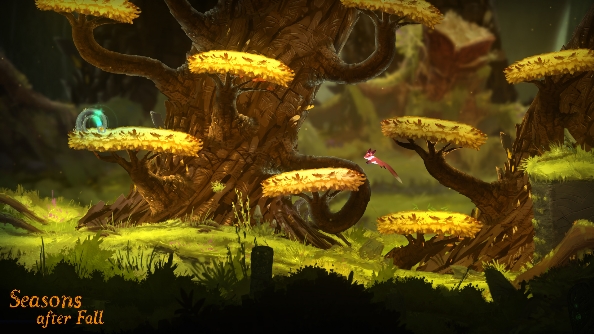 In looking to create a profound narrative, the studio created a beautiful world that was at odds with a darker story. “What you see is a beautiful game inside a forest,” notes David. “But the reason why you are there is a mystery. There are no animals other than the guardian spirits, so why is this fox here? Why are you possessing it? Who is the voice that is talking during the gameplay? You will find some melancholic elements through this character because it’s quite a lonely place.”

David explains that the story will be painted in far more shades than black and white, and that certainly applies to the artwork, too. Géraud Soulié, the project’s only artist, had to re-create every one of the game’s nine different environments four times over for each of the different seasons (“I can see why no one else does that!” laughs David). It’s all accompanied by music from composer Morusque, recorded by a live string quartet. Evidently, this is quite the artistic achievement.

It’s clear that David has passion for Seasons After Fall, as anyone would do for their debut project. The setback the game suffered is no doubt frustrating, but after releasing two other titles, it’s time that Swing Swing Submarine returned to their origins and finally let players loose in their beautiful, haunting forest. And thanks to Focus, the secrets of the Guardians will be revealed before 2016 sees its final season.