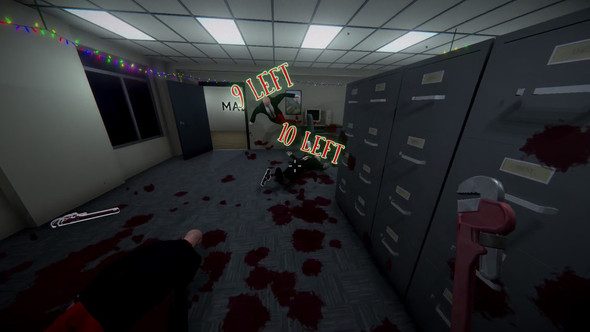 Christmas may be over, but it’s never too late for some seasonal fast-paced murder. At least not according to Code Avarice developer Mike Maulbek’s new solo project, Season’s Beatings.

Looking for more first-person shooters? Check out our definitive list of the best FPS games on PC.

‘Tis the season to shoot, smash, and spray your way out of a never ending office Christmas party, taking out militant holiday fanatics with whatever weapons you can get your hands on.

Shoot your enemies until you’re out of ammo, or crack them over the head with a baseball bat – the method is up to you, as long as it’s delivered with the appropriate holiday cheer.

Described by the dev team as a ‘first-person Hotline Miami,’ Season’s Beatings will take you on a murderous rampage through 21 increasingly difficult levels, dropping a random assortment of weapons to fight your way through waves of enemies.

If that sounds up your street then embrace your inner scrooge and check out the game’s new sing-a-long trailer up top, which is exactly as ridiculous (and fun) as it sounds.

Season’s Beatings is now available on Steam, despite Maulbeck’s previous game being removed after he issued threatening messages against Gabe Newell.