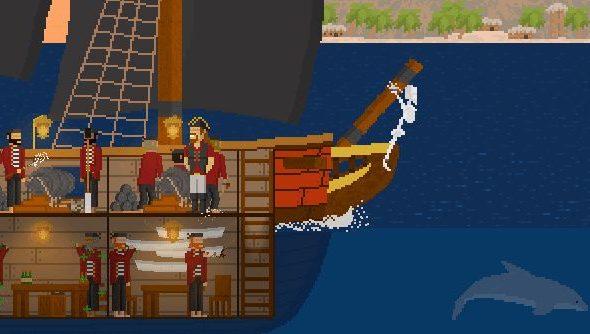 Have you ever wanted an FTL-like game, but where the space is the sea and your ships are made of wood? Seaworthy is that game – an adventure roguelike about sailing the high seas in search of gold, glory and more gold. As the captain, you’ll be tasked with growing your crew and improving your ship, while trying to keep her floating through dangerous encounters involving other pirates, and even mythical sea monsters.

Similiar to FTL, the game will have a centric plot, while allowing you to experience random events and sub plots during your voyage. Random encounters can be equally bountiful or deadly – death is permanent for your crew. The map itself will also be procedurally generated to avoid any familiarity between playthroughs.

Combat comes in two different flavours. Ship versus ship will focus on crew management in order to best deal with new situations as they arise. The enemy might breech your hull with a well placed cannon ball, injuring a bunch of your crew and forcing you to divert resources.

Sometimes, the enemy will take the fight to you directly and board your ship (you can also do the same to them). Different crew memebers will excel with different weaponry, so placement is key. Your captain is also key at barking out orders to boost morale, and keep your crews will from breaking.

If you like the sound of Seaworthy, then head over to their Kickstarter page They’re nearly half of the way to their funding goal, and also pursing a Steam release with their Steam Greenlight page.