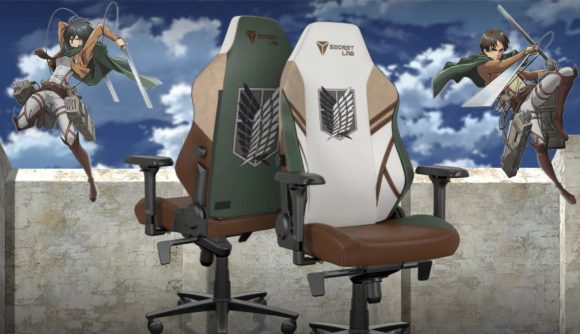 Attack on Titan fans have had a long journey since the show first debuted nine years ago, but don’t despair that the anime series is just a couple of episodes away from wrapping up in a not-so-neatly tied bow. While Eren and company’s journey is coming to an end, Secretlab is giving you the chance to immortalise the story with its first special edition gaming chair of 2022.

Taking inspiration from the Survey Corps, the Wings of Freedom symbol is the centrepiece and the colours resemble the standard uniform: white for the shirt, light brown for the jacket, green for the cloak, and dark brown straps that would otherwise keep the vertical manoeuvring equipment in place. Just don’t expect it to defy gravity, as you’ll need to take down titans the old fashioned way – with your gaming mouse and keyboard.

It comes with all the bells and whistles of the appropriately-named Secretlab Titan Evo 2022, including Neo hybrid leatherette, improved lumbar support, and a magnetic memory foam head pillow. The company even chucks in a pack of Attack on Titan edition leather wipes, which Secretlab says are formulated for use specifically with its proprietary materials but we can’t say for sure what separates them from ordinary disposable cloths.

It’s unlikely to be the last special edition we see this year, however, so keep your eyes peeled. With games like Elden Ring, TV shows like Obi-Wan Kenobi, and The Batman on the way, anything’s possible.