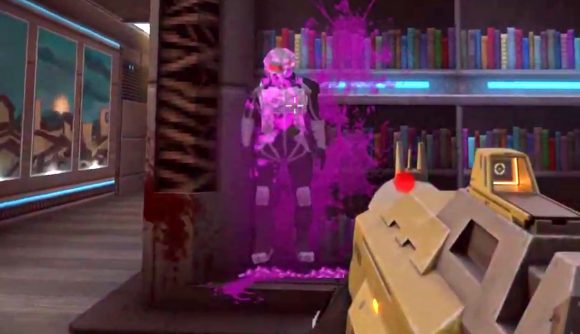 There are loads of great indie FPSs out there or on their way – from classics like Dusk to more recent releases like Vomitoreum – but Selaco is looking truly special. It’s somehow running on the Doom engine and is heavily influenced by Monolith’s classic F.E.A.R. – and it’s just added that game’s iconic nailgun. Oh, and a banana.

Selaco is an indie FPS that’s slowly been building attention from the community, and combines classical gameplay from titles like Doom and Quake along with its main inspiration, 2005’s F.E.A.R. – specifically in terms of action set-pieces, bullets that react properly to the world, setting, and awesome enemy A.I. No word yet on whether a terrifying long-haired ghost girl will feature, though.

The game is being built on the GZDoom engine, which you wouldn’t be able to tell if you weren’t aware just how creative fans can be with it. It looks shockingly good, in fact, which is well showcased in its latest videos.

If you’ve never played F.E.A.R., its best weapon is by far the Penetrator nailgun – which can stick enemies full of nails and pin them to the wall if they’re close enough. Now the Selaco team have added the same awesome weapon to the game, with the twist that it’ll also have alt-fire modes – as if it wasn’t fun enough already. If one of those modes isn’t a harpoon that launches enemies across the room we’ll be disappointed.

The nailgun is here! We'll be showcasing more Nailgun action (including one of its many different Alt Fires) in our upcoming 3-minute uncut gameplay video.

For now, have some footage of Dawn wrecking havoc with this new weapon!#GZDoom #indiedev #fps pic.twitter.com/pxT962hER6

Then there’s the banana, which we were serious about. Pick up a banana, eat it, and throw the skin on the floor. Any enemy that walks over the skin will slip and fall over, leaving them vulnerable. The team definitely has a sense of humour.

Combat in Selaco is hard and fast. Enemies are savage, swarming you with ruthless tactics and stopping at nothing to take you down. But if you can peel one away from the group, they may just slip up.

While Selaco doesn’t have a release date yet, it’ll be shown off more at 3D Realms’ upcoming digital event Realms Deep – which runs from August 13-15 and will also feature other FPS titles such as the Aftershock expansion for Ion Fury and gothic shooter Graven. Keep an eye on Selaco though, as it’s certainly piqued my interest at least.