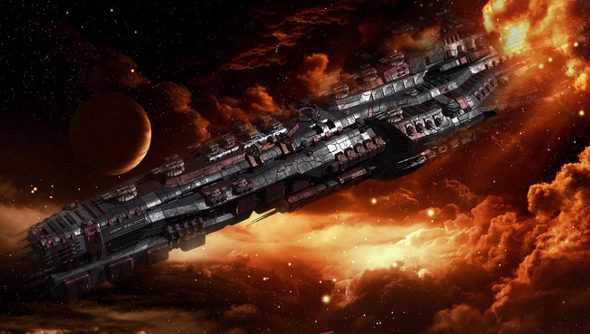 If there’s room in the MMO-verse for countless fantasy MMOs, it’s not completely bonkers to think that there might be room for more than one space-faring sandbox MMO too. That’s probably what Chaos Interactive, developers of Seldon Crisis, are hoping.

At first glance, the similarities between Seldon Crisis and EVE Online are many: the non-linear progression, the many paths from trader to fighter pilot, the player run economy and political system. But there are big differences too, from the levelling system to the business model. There will be a “small” monthly subscription, but if the community grows large enough, the developer will be able to offer the game for free with microtransactions for vanity items.

Seldon Crisis is loosely inspired by sci-fi heavy weight Isaac Asimov’s Foundation series. The universe boasts 20,000 years of backstory based on Asimov’s series, with a new book being distributed piecemeal during the development process that will connect Foundation and Earth, Asimov’s last book in the series, to the game.

The universe will be properly open, too, allowing pilots to travel the galaxy without the need to go through stargates. The ships you’ll be able to use to explore this open galaxy are modular and customisable, and run the gamut from hit and run fighters to support carriers and mine-laying ambushers.

It’s still early days, and details are a bit slim, with the website being a bit empty at the moment. The first dev blog was posted on Tuesday, though, explaining how the developer arrived at the decision to make the MMO full loot. “Seldon Crisis, is oriented towards old and mature players, and no compromise will be made to water down or soften the gameplay, we are looking to do a real harsh universe with a player driven economy, and full loot is a necessity for make this work.”

There’s a forum on the official site, and you can sign up for updates from the devs.

Has your interest been piqued?