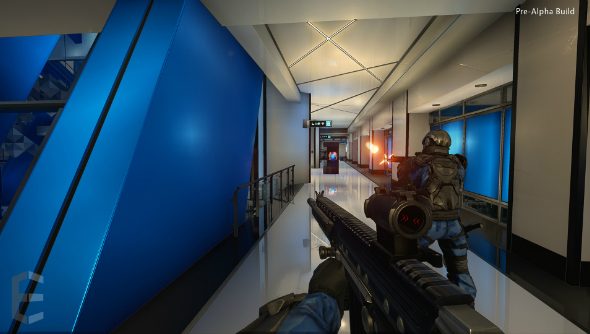 Made up of industry veterans with sexy CVs that cover development on games like SWAT, Halo, Gost Recon and more, indie outfit Serellan have announced the release of Epsilon, an Unreal 4 powered squad shooter with a focus on single-player gunplay, tactics and planning. The FPS takes place in the near future and puts you in control of an armed tactical unit of Interpol that shoots lots of drug dealers and terrorists in close quarter environments.

Though you play as – literally – the world police, your squad won’t contain any Americans, which the press release claims is a first for contempory shooters. They have personalities under those cool-ass helmets, don’t you know. As well as treading new ground by not cloning the protagonist of every game ever, the art style looks to help make Epsilon stand out in a competetive shooter genre.

Here’s a quote from Serellan’s Lead Artist, Dean McGahan: “The art team worked together to build a visually vibrant experience for Epsilon,” said McGahan. “I am happy that we were able to bring that style to Eplison. We didn’t want to work on yet another green and brown shooter.”

Epsilon will enter Steam Early Access this Autumn. As Serellan is a disabled veteran-owned company, a portion of the game’s proceeds will be donated to combat veterans and active-duty members.

What does the art style make you feel? Do you think it’s refreshing that is has no playable Americans? Do you love me? Let us know in the comments.