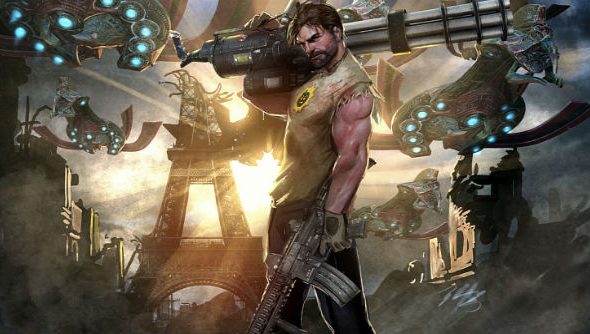 Much of the talk about E3 this year may have been about who won’t be there – Activison and EA, we’re looking at you – but that doesn’t mean the show floor will be devoid of top games. Top games like Serious Sam 4.

Gun crazy? Check out the best FPS games on PC.

Back at the start of the year Croteam revealed that the latest game in the series was still in development – and would apparently feature cutting edge tech, no less – and now publisher Devolver Digital has all but confirmed it’ll make its debut at E3 later this month.

In a tweet published this week, Devolver claimed that it will demo Absolver, STRAFE, Shadow Warrior 2 and a new title from Croteam at the show. Now, given Croteam is also working on a follow up to Talos Principle, that’s no confirmation that Serious Sam 4 is heading for LA on its own.

Handy, then, that Croteam itself decided to make reference to Devolver’s tweet on Facebook, with the comment that things are “getting serious”. Yep, that’s Serious Sam 4 bound for E3, then.

Indeed, it may well be the case that some of the big boys’ decision to steer clear of the show floor at E3 this year may allow some of the smaller players to grab a larger share of the limelight. EA, however, will be just over the road from the LA Convention Center holding an event that’s – shock, horror – open to the general public. E3‘s far from dead then, but it’s most definitely evolving.

Serious Sam 4, meanwhile, looks set to benefit from some serious (ha ha) upgrades to the Serious Engine, even over the version that made an appearance in The Talos Principle back in 2014. Given it’s coming up for five years since Serious Sam 3: BFE hit PC, it’s little wonder Croteam is looking to ramp things up.