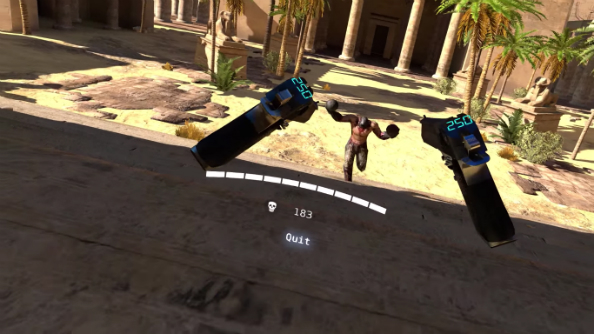 Update June 14, 2016: Oculus have reached out to PCGamesN to clarify that ‘at no time’ did they request Croteam to make Serious Sam VR a Rift exclusive.

The statement, issued after a member of the dev team alleged Oculus offered ‘a sh*tton of money’ to make the game for their Rift VR platform, disputes their version of the deal.

“In the case of Croteam, at no time did we request that they stop development for other platforms, and we look forward to seeing Serious Sam be successful across the entire VR ecosystem,” said a representative for Oculus.

The deal, which eventually Croteam turned down for an undisclosed sum, is also something Oculus offer other developers without the caveat of full exclusivity from competitor HTC Vive and the Steam VR ecosystem, though launch exclusivity is mentioned.

“We regularly offer developers financial grants to help fund early development of new titles to accelerate development or expand the scope of the game,” Oculus said. “In some cases, we exchange funding in return for launching on the Oculus Store first, with the expectation that the game will go on to launch on other platforms.”

Update June 14, 2016: A Croteam developer revealed that Oculus offered the Serious Sam VR team “a sh*tton of money” to make the virtual reality game exclusive to the Rift.

Mario Kotlar, a level and environment designer on the Croatian development team, made the revelations in a reddit thread entitled “F*ck Facebook, and f*ck Oculus” last night.

“They tried to buy Serious Sam VR as well,” Kotlar wrote. “It wasn’t easy, but we turned down a sh*tton of money, as we believe that truly good games will sell by themselves and make profit in the long run regardless. And also because we hate exclusives as much as you do. Dat shitt*n of money tho…”

Kotlar went on to explain he wasn’t at liberty to divulge the amount, or even privy to the more nuanced details of the deal, but the amount was repeatedly referred to as a “sh*tton”.

In a further edit clarifying sentiments toward small developer buyouts, Kotlar urged VR fans not to blame studios in less fortunate positions to decline such offers.

“Please don’t hate on other devs too much, I’m sure some of them didn’t have financial alternative but to accept such a deal in order to even see their games finished,” Kotlar wrote. “In such situation, anyone would have done the same.”

Only Vive has been mentioned thus far, but will it really give Oculus the cold shoulder? My money’s on an Rift announcement to join this one some time between now and Serious Sam VR’s summer release date.

The game’s making full use of Vive’s haptic motion controllers, allowing Sam precision aiming with dual pistols and… well, dual everything else. Rocket launchers, assualt rifles, mix-n-match affairs are all present. Sam hasn’t aged brilliantly since his inception, but this does look a laugh, doesn’t it?