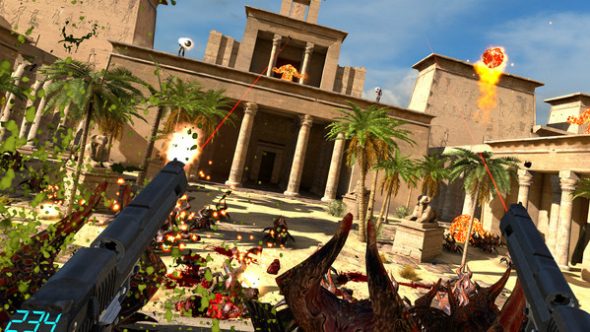 If you’re on the fence about whether a game so dependent on running as well as shooting could work in VR, here’s some more Serious Sam VR gameplay to ease your worries.

Still after more Vive and Rift experiences? Here are the current best VR games for PC.

See the above footage wherein PCGN’s Matt “Low-key From The Streets” Purslow turns his dual-wielded irons sideways to dispense maximum justice on wave after wave of bugs and spooky skeletons.

You can see more of what we’ve found out at Gamescom on the YouTube channel, which is filling up nicely. If you liked Matt demonstrating proper handgun handling, there’s a lot more for you to check out so the old like and subscribe wouldn’t go amiss. And do let us know what you’d like to see next!