There’s more to skateboarding than hopping on a ten-inch piece of maplewood and rolling off down the road. For millions around the world, it’s not just a sport, but a culture. Skateboarders learn to adopt different stances and styles, flock to well-known spots in efforts to stamp their mark, and even film their most audacious tricks before editing them into a showreel and sharing it with the community.

You can do all this in Session when it hits Early Access on September 17 – tomorrow – on Steam. Oh, and you can do it all while listening to Del The Funkee Homosapien. Let’s not forget that.

From the in-depth video editing suite enabling you to mix and share in-game montages, to the True Stance Stick controls which map each of your feet to a thumbstick for maximum control of your rider’s movements, this is a game that takes skateboarding seriously. One look at the frighteningly faithful 1:1 scale recreation of lower Manhattan is enough evidence of that, replete as it is with legendary locations like the Brooklyn Banks and surrounding financial district.

We spoke with crea-ture Studios’ co-founder and Session’s creative director Marc-Andre Houde to find out how the game’s development benefitted from Unreal Engine 4, as well as why players are going to be, in Houde’s own words, “jumping on their chair, cheering, or screaming ‘yes!’”

As mentioned, Session takes place in a lifelike slice of Manhattan. While on the surface a mundane, even dull urban location, under the urethane wheels of a skilful skater it quickly transforms into a playground of grindable rails, jumpable stairs, and concrete ledges to lip trick. You won’t be launching yourself off buildings while spinning like a microwaved pretzel, mind. Rather, the excitement lies in kickflipping innocuous kerbs and making it up on top of a picnic table without falling on your face. The hurried New York businessman sees obstacles; the hungry skateboarder sees opportunity.

And that opportunity lies anywhere you care to look in Session’s open world – a playing space Unreal Engine 4 helped facilitate. “Unreal is known to be one of the top graphics power engines,” says Houde. “We had a vision of streamable and rich open world, and with the simple fact the art team is composed of two artists at the moment, we knew Unreal would give us this edge in terms of features and optimisation we’d save to fit in our work. So far, this move paid off really well and keeps paying off!”

You can even customise your surroundings. Whack open a menu and stack plywood boards against walls for makeshift ramps, or line up a long string of metal police fences to give yourself grinding options. Of course, crea-ture Studios had way more to think about than world design. As authentic as it looks, Manhattan here is merely a canvas, your board being the brush by which you paint your masterpiece. 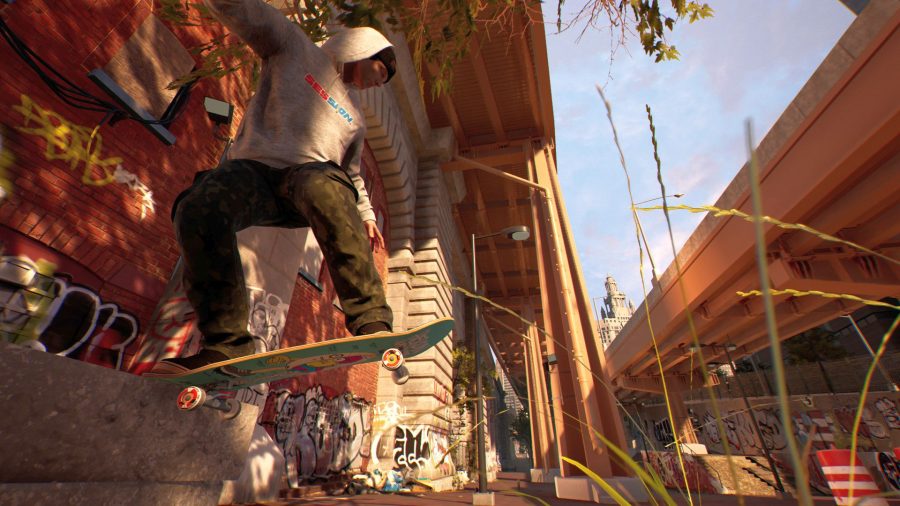 This required the sort of sophisticated physics model Unreal Engine 4 excels at. “The most rewarding part of developing Session is by far the birth of our board physics,” Houde tells us. “Just the fact you can literally grind every edge (that would make sense) of the entire level is mind-blowing. When we started, there was a lot of time-consuming and repetitive tasks that were needed to be done by the artist to make an object grindable in every possible manner, and this step was extremely time-consuming. It was literally impossible to think ahead about everything people would try to do in the game. Now all we have to do is a model, an accurate simplified collision, and voila. Ready to be shred.”

But it’s not enough for Session to let you shred everything you’d expect an actual skater to shred. Said shredding has to both look and feel real. And for that, crea-ture Studios leveraged the power of Unreal Engine 4 – more specifically, its ability to accurately capture the minutiae of skateboarding. As Houde tells us, “the devil’s in the details. We spent a lot of time trying to sync the board physics to the character animation so it really feels like the shoe is scraping the grip tape in slow-mo.” 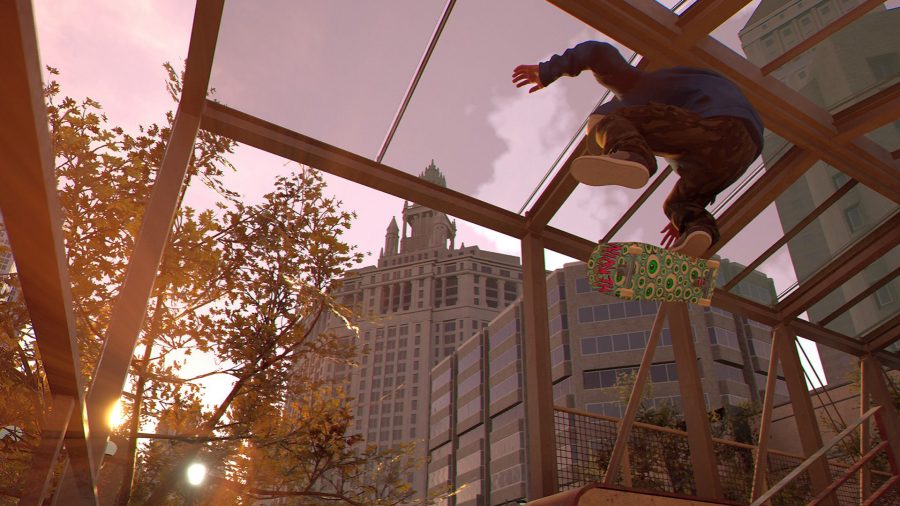 It’s the kind of detail that would be important to real-life skaters, and reflects the expertise and passion of the team. And it’s far from the only one. Other neat touches include minor adjustments of your skater’s foot placement as they continually work to maintain balance, the way your skateboard trucks pinch down satisfyingly over a rail, and the various contextual animations involved in exiting a grind. You can savour all of this using the replay feature – zoom in and observe your bag of tricks in glorious slow motion, or record a long combo and set it to music. However you use the replay functionality, make sure to try the fisheye lens for that proper ‘90s skate video feel.

Modern sports sims need to nail every facet if they’re after a convincing portrayal: the look, the sound, the setting, the control scheme. Despite its relatively small size, crea-ture Studios aims for the same 360-degree approach with Session. “Focusing on only one thing would be a mistake in our opinion, because we think everything around the skating is part of the experience: satisfying grinding and feeling the board reacting properly to the surface, to the sounds, to the visual of that surface, everything is tied together. Even if some of those are more important than others, they [can’t] feel complete unless they’re supported by every other aspect of the game.”

If nothing else, few things capture the ecstasy and despair of skateboarding like finally pulling off a basic flip trick in a deserted park after you’ve fallen on your face 50 times.

Session launches into Steam Early Access tomorrow, September 17. Unreal Engine 4 development is now free. In this sponsored series, we’re looking at how game developers are taking advantage of Unreal Engine 4 to create a new generation of PC games. With thanks to Epic Games and cre-ture Studios.