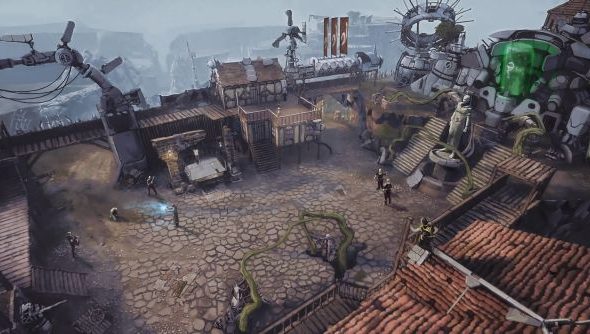 As we reported a few weeks back, Witcher 3 Senior Quest Designer Jakub Rokosz has started his own game studio, Fool’s Theory. Their first game has now been announced, Seven, which promises to be a “Thief-inspired, 3D isometric RPG” set in a non-linear world with sandbox elements. Certainly an exciting set of phrases, and the art splayed across the official site looks lovely.

The world itself is set long after a mysterious apocalypse, with nature having retaken large swathes of the Earth. Humans live in ramshackle towns, scattered across the landscape. There’s also talk of magical buildings that sprouted from the ground in the recent past and the various factions that want control of them for their secrets and power. Plus, the destroyed cities of previous human civilization are ripe for plundering and exploring.

You play an adventurer, natch, who can choose how to progress through this dual world of Dark Age people and fears with space-age technology. The “Empire of Vetrell” is certainly selling itself as a unique place and has the experienced world builders required to bring it to digi-life, but no footage and few details make it difficult to pass judgement. An in-universe story and fact sheet are all that’s been officially released so far.

According to PCGamer, release is planned for the second half of 2016 as an early estimate. Given the ambition on display and the start-up nature of the studio, I’d speculate a Kickstarter or other crowd-funding option may be on the cards.