Surviving the Peruvian jungle is no easy task, which is why you’ll want to pack some Shadow of the Tomb Raider tips in your rucksack before heading off to the save the world from the impending Mayan apocalypse. Thankfully, you won’t need to head off to some kind of doomsday yard sale to find such tips: they’re right here on this page.

Yes, our Shadow of the Tomb Raider tips are ideal for getting through the game (relatively) unscathed. And, yes, you’ll need them: while the game is linear in much the same way as the previous two entries in the rebooted series, this third adventure is a little more mechanically rich, with some new systems that you’ll want to use to your advantage.

So grab your climbing axes, load up your pistols, and sharpen some arrows: it’s time to become the best predator you can be and put a stop to the end of the world like the heroic archaeologist you are. You won’t even need to watch a Bear Grylls documentary (don’t worry, there’s no need to drink… that to survive Shadow of the Tomb Raider’s jungle).

Shadow of the Tomb Raider’s combat systems are similar to those seen in the previous games, but with an increased emphasis on stealth options. Stealth is the most fun and inventive way to engage enemies, and so you should invest skill points in widening Lara’s sneaky arsenal.

In the Scavenger branch of the skill tree you’ll find unlockable abilities that allow Lara to craft special ammunition for both the pistol and bow. Flare and concussion rounds can be fired from the pistol that blind and disorientate enemies, which will allow you to escape from a firefight gone wrong, and then quickly return to stealth. Poison arrows can be used to lay proximity traps that engulf passers-by in clouds of lethal gas.

Further fun can be had with the Viper’s Snare skill as it applies booby traps to corpses. When enemies approach dead comrades to investigate their murder they’ll be met by an explosion that there’s no coming back from. Combining this with your other sneaky skills allows you to take command of the combat space and force enemies into compromising positions. 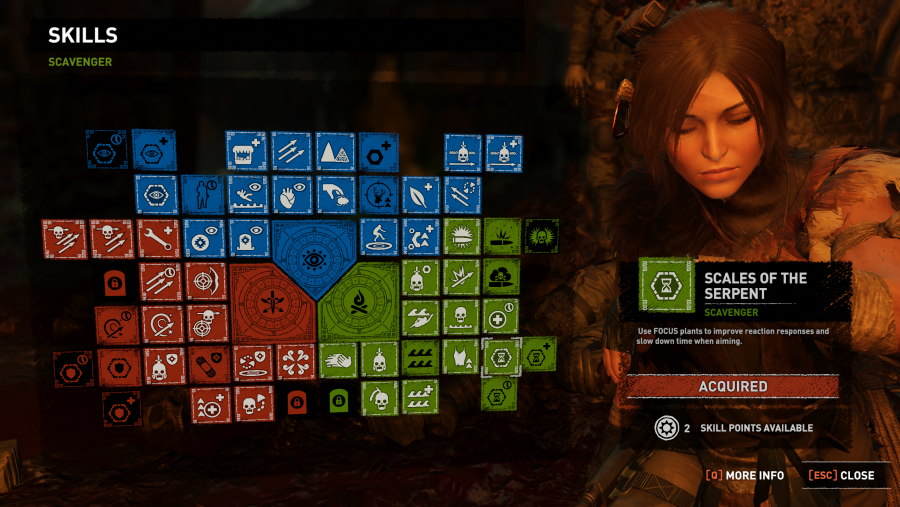 Get hooked on herbs

The Peruvian jungle is dense with plantlife, much of which can be plucked for use in crafting. Tapping Q while exploring will activate Lara’s Survival Instincts skill, which highlights harvestable plants in orange. Mushrooms, seaweeds, and various flowers are all available for the taking, with each possessing the potential to enhance Lara’s senses and abilities.

By default Lara is able to craft a healing medicine that can be applied with a tap of F1. On the regular difficulty level the regenerating health is often enough to keep you alive, but some late-game scenarios will push Lara into the danger zone, so keep this option in mind. Giving Lara an immediate health boost rather than waiting for the regeneration to kick in is vital in these situations. As such, it’s wise to have the materials ready for some on-the-spot crafting.

With some points invested into the skill tree you can unlock three further plant-based buffs. The Heart of the Jaguar skill allows Lara to use an Endurance boost that reduces damage from both ranged and melee enemy weapons. A Perception buff unlocked via the Eye of the Eagle skill highlights collectable natural materials and animals in the world without the need to stand still and activate Survival Instincts. Finally, the Focus mixture, unlocked with the Scales of the Serpent skill, slows down time when you aim to help in scoring those perfect headshots. 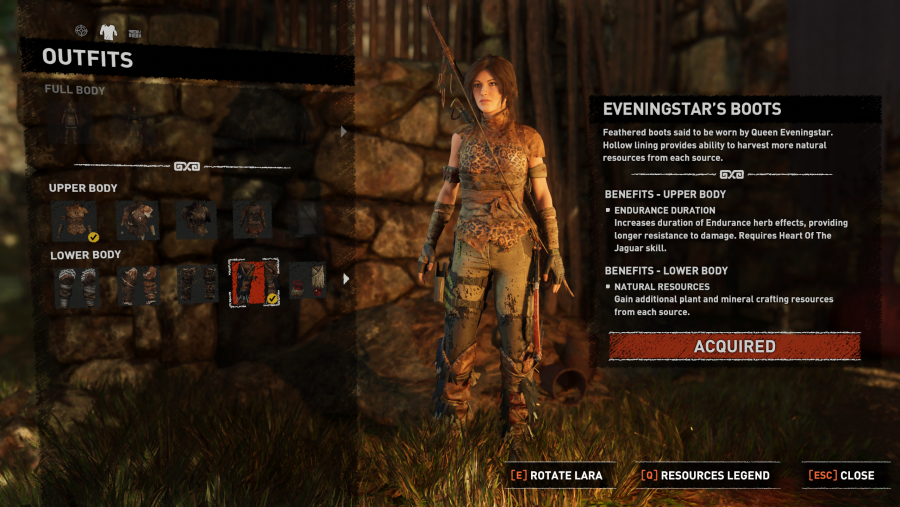 When resting at campfires you can change Lara’s outfits. There’s a range of costumes to choose from, be that a variation on the classic blue tank top and tan trousers, or one of the many other wardrobe options Lara has donned on her adventures over the years. You can even opt for the original Core Design look, which renders Lara in 1990s graphics – low-poly all the way.

But while these outfits may look swish, it’s the crafted costumes that you’ll really want to make use of. Throughout the game you’ll find new pieces of gear that must first be fixed up with natural materials such as furs and feathers before you can wear them. These pieces of gear don’t just look great: they offer stat bonuses, too.

You’ll acquire your first stat-boosting costume, the Vest of the Empress Jaguar, a few hours into the game, which reduces enemy awareness. But you’ll want to keep an eye out for the Eveningstar’s Boots and craft them as soon as possible, as they provide additional plant and mineral crafting materials from each source you find, meaning you can make even more herb concoctions and fancy arrow types. 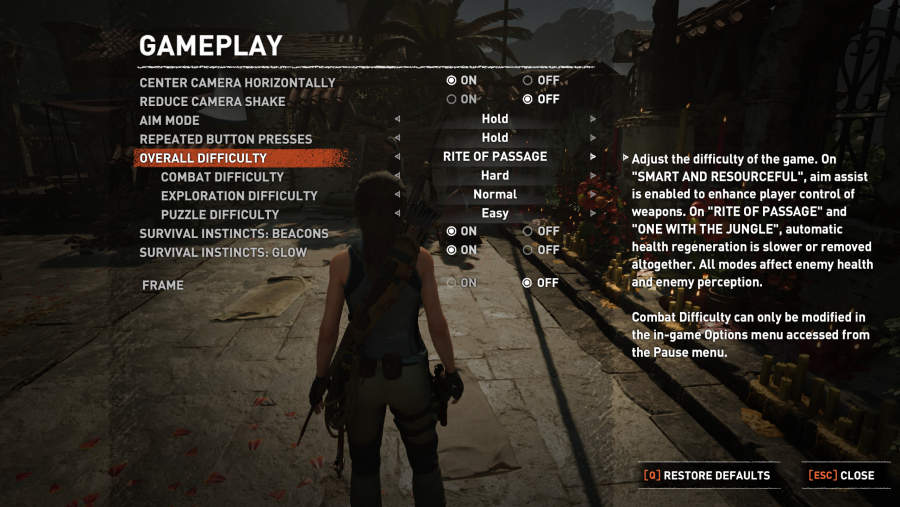 Shadow of the Tomb Raider is comprised of three main ideas: combat, exploration, and solving puzzles. Each provides its own challenge, and there’s no shame if one of them isn’t your strong point. Occasionally, a combat encounter will prove just a bit too infuriating, or a puzzle will leave you scratching your head to the point of drawing blood. That’s not an enjoyable way to spend a day playing videogames, but Shadow of the Tomb Raider has a brilliant answer to this problem: modular difficulty.

If you usually opt to play the game on the medium difficulty setting, but problem solving isn’t your area of expertise, you don’t need to reduce the entire game down to easy mode. You can set the puzzles to a more accessible difficulty, which adds extra clues to each one, all while leaving the combat and climbing at the medium setting.

This system works in the opposite direction, too. If you find that the climbing isn’t challenging enough for you, setting the exploration option to hard mode will remove all the signposting from the game and force you to find the climbing routes through the jungle without aid. No longer is the perfect balance dictated by the developer. You can choose how hard each element is to ensure the best play experience for you.

These four tips may seem simple, but they’re key to making the most of Shadow of the Tomb Raider’s excellent gameplay. When the going gets tough, knowing how to make the most of Lara’s sneakiest abilities, how to keep your senses heightened, and what the best gear to wear will help keep you ahead of Trinity.