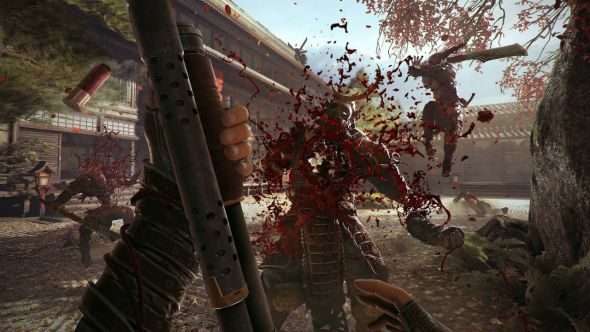 Here are the very best shooters on PC, should you be wanting one.

Clearly they like a challenge, because the sequel they showed us at E3 was completely different. It features vast non-linear levels, and an ambitious plot that plants a sharp female companion inside Wang’s brain – there to provide woke counterpoint to his macho musings.

Shadow Warrior 2 is a bold reinvention indeed, and you’ll be able to find out just how bold for yourself sometime in early October.

Shadow Warrior 2 is hitting PC in less than two months (!!!) be sure to wishlist it! https://t.co/AuFh9Xn03g pic.twitter.com/rtULeWn8Kh

It doesn’t feel quite right to call Shadow Warrior a shooter. It constantly encourages you to get in close, digging your chainsaw into ten-foot-tall serpents and having a real root around in their internals. If that sounds a bit gory for you, well: you wouldn’t have liked the ‘90s much either.

Do you think you’ll be lopping limbs off Lo Wang botherers come October?