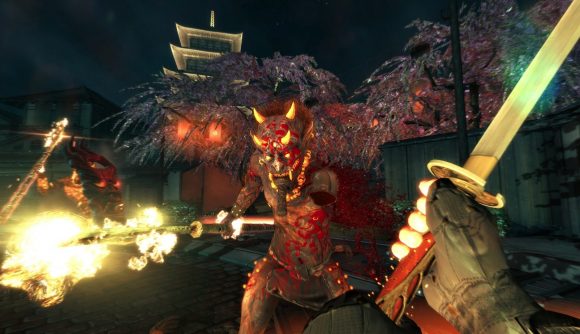 Shadow Warrior will see another sequel – or maybe it’s getting a TV show, like Fallout. Who knows in these crazy times? The official Shadow Warrior Twitter account rumbled to life today to post an image that indicates we’ll be seeing a teaser trailer for something Shadow Warrior-related in the near future.

The account tweeted only an image of a sign that reads, “Teaser trailer filming in progress, Quiet please!” Essentially, it’s teasing an upcoming teaser trailer.

While that happens with annoying frequency these days (announcing an upcoming announcement has become common), it’s the kind of thing that fits with Shadow Warrior’s self-aware, cheeky rebooted identity. Flying Wild Hog’s 2013 version of Shadow Warrior casts you as a reinvented Lo Wang (ha ha), a wise-cracking Gundam fan with a chip on his shoulder who winds up on a quest for a mystical sword. Along for the ride is a masked demon named Hoji who never gets tired of giving Lo Wang a hard time. While the humour may be a bit obnoxious for some, it was wrapped in a fun and mechanically solid shooter that let you pull out a sword when you were in the mood for some demon dismemberment.

Shadow Warrior 2, which launched on PC in 2016, changed up the formula from the familiar corridor shooter to a loot-focused affair set in procedurally generated environments. Opinion splits on how well this worked, but for this writer’s money, it was a good time that was perfectly capped off with a Stan Bush track recorded just for the game.

So where does Shadow Warrior head next? The lippy attitude and self-awareness make it all but certain that a new Shadow Warrior game will be taking a few pot shots at the state of the game industry, and a lot has happened since 2016. There’s certainly ample targets for skewering: loot boxes, hero shooters, battle passes… there’s plenty of material for Lo Wang to work with.

Then again, a back to basics approach couldn’t hurt either. We’ll have to wait until Flying Wild Hog and Devolver are ready to show us this teaser of theirs. In the meantime, there’s always the best FPS games of 2020 to blast your way through.