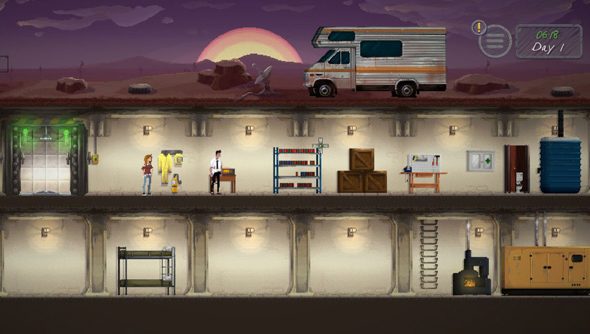 Unicube have an simple pitch for Sheltered: Fallout meets The Sims. But it’s become less useful since E3, where the surprise party piece of Bethesda’s conference was Fallout Shelter.

“I woke up in my hotel room and had a text from my mum, who doesn’t know anything about games,” says Meek. “She was like, ‘What’s this new game that’s just been announced? It’s exactly the same thing.'”

But Sheltered isn’t quite like anything on your phone, or anything on Steam for that matter. It’s a domestic management game that frames a familiar backdrop from an unfamiliar perspective: the underground bunker housing a family in the aftermath of atomic devastation.

You’re given four customisable family members, each with their own stats and traits. They’re your responsibility – and once they’re dead, they’re dead.

Our family’s de facto leader is Catherine. She’s Optimistic, which helps, and has enjoyed a Good Upbringing – presumably one of the last to be had. She’s married to a bald man, Raymond, who is both Athletic and Courageous – an end-times Vin Diesel.

You’re required to have two children – Unicube are determined to make you sad. Our girl is a Bully, and her brother a Deep Sleeper and a Brainbox. They’re capable in their own right, though not quite as adept as the adults.

“We find that some people like to kill them off,” laughs lead programmer Dean Foster.

“So that they’re not a strain on resources,” finishes artist and designer Sonny Meek.

The family unit is filled out with a pet. Cats are more efficient at hunting rats, but dogs grant a stress reduction bonus (and in the game). 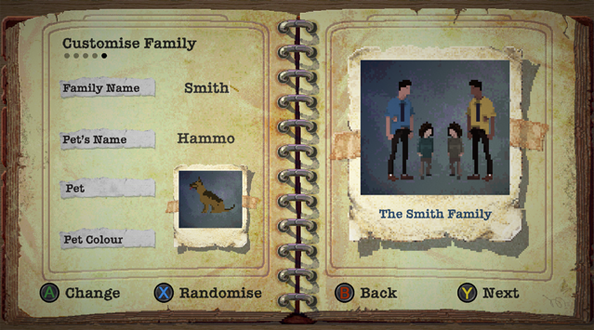 All of your wards, and the bunker around them, are rendered in a pixel art style that tends away from the cutesy and towards the leanness of Superbrothers: Sword & Sworcery. Instantly, Sheltered feels unflinching – not a game to turn away from the necessary nastiness involved in survival in favour of easy Mad Maxisms.

As in The Sims, each character has a set of bars that track their everyday needs – their hunger, thirst, personal hygiene, and so forth. And as in The Sims, you can grant them a certain amount of free will to tend to the basics, leaving you largely free to concentrate on the higher level business of improving your all-too-humble abode.

The shelter you inherit is frugally furnished – turns out IKEA superstores aren’t built to withstand mushroom clouds. Its facilities begin at the lowest tier, and you’ll want to upgrade your workbench to make, for instance, toilets that are more efficient in their use of water than the unglorified bucket you start off with.

A generator powers everything in the bunker, so you’ll have to scavenge for fuel to keep it going – otherwise the filters that keep your air and water clean will stop working. Only when everything is ticking over relatively nicely can you be more ambitious in your pilfering. There’s a campervan parked tantalisingly above your base, and the parts required to run it are rare in the extreme – but the reward is safer and more spacious overland travel. 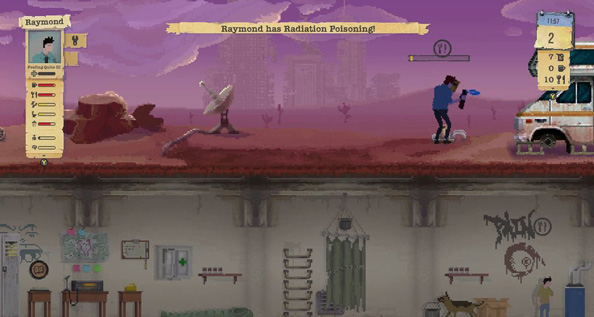 You’re all but forced to send a family member outside the safety of the shelter. Vegetable patches, snare traps and occasional trade with passing strangers will only get you so far.

“You can almost get to a level of self-sufficiency,” says Meek. “But we’ve been very careful with the balancing, so you’re never quite there. You’re always on the edge.”

Catherine dons a mask to shield herself against radiation, and picks up a pipe as a weapon. With a scrape of the shelter doors against the concrete floor she’s gone, out into the wasteland. She’ll raid nearby schools, farms and churches on a randomly-generated map and radio in any important discoveries – namely items useable in crafting.

You’ll have a sense of which particular parts are important to you, since Unicube are keen to list components in-game rather than have players alt-tabbing to a wiki. But finding them in the face of cruel RNG is another matter. One tester spent his entire playtime looking for a single nail to fulfil a blueprint – and found it only at the point of death.

Expeditions expend precious water – so the onus is on the player to make shrewd, economic choices about which direction to walk in. And there’s another consideration: the longer you’re in the wilderness, the greater the chance of an encounter. 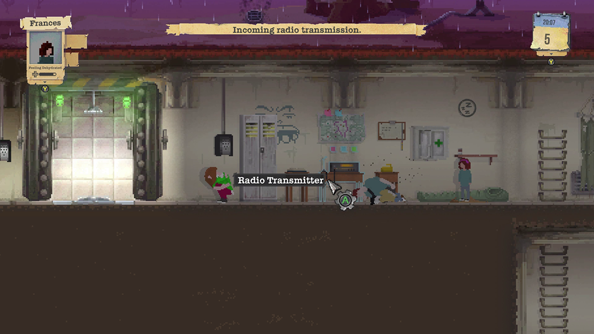 We’ve now switched momentarily from the cross-section view of the bunker to resolve one such meeting. Catherine’s come across another traveller, and has to parse their intentions – working out whether she wants to attempt to talk, attack, or run.

Combat is built on a basic, turn-based system based on D&D-like mechanics. Gunfights are mercifully infrequent, but “pretty harsh” – a one-shot-kill affair, but for craftable body armour.

Bartering is just that: there’s no universal currency. Any item might become the most valuable in the game – a plank of wood, perhaps, or a battery – depending on the needs of your bunker.

The other option is recruitment. Inviting survivors inside the shelter means more mouths to feed, but also extra hands to put to work in bringing about that better life.

“It’s good to get some extra people in who can be your pawns,” advises Foster.

You can care for them in the same fashion as your family, but they’ll always be second-class citizens – the game ends when your original quartet do, so it only makes sense to look after newcomers as long as they can serve the first four. 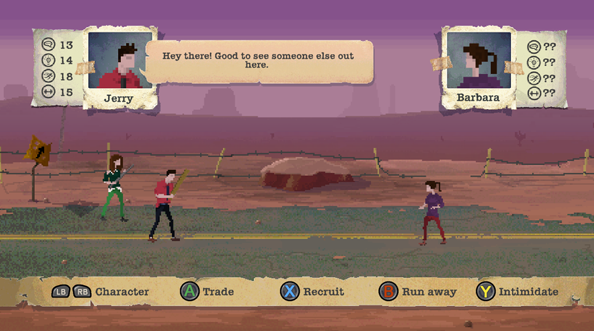 There’s no fixed limit on bunker numbers, and with the right tools you can expand your home to make space. One QA tester took in around ten wanderers, and watched the place descend sharply into chaos; another survived for 170 days by sending new recruits up the surface to die and harvesting their bodies for food and power – all the while keeping the base topped up with valium to counteract the trauma that threatened to send their residents into horrified catatonia.

“All his family were just doped up, eating people,” remembers Meek. “Sometimes people get pretty dark with it. But there’s a flipside – some people get really attached to their characters, and when they die make proper graves for them.”

Food source qualms aside, all Sheltered players are doing fundamentally the same thing: reaching for maximum efficiency, and trying to glance down regularly enough not to trip up. Yes, a madman with a rock might kill your breadwinner – but you’re far more likely to forget to maintain the water filter and leave everybody dangerously ill.

“Every consecutive playthrough, you get better and better,” says Meek. “You start to develop your own strategies, and learn how to lay out your shelter.

“It’s like a butterfly effect in this game. One little thing can bring down the whole stack of cards.”