It’s the end of the world. The surface is an irradiated wasteland filled with mutants and desperate survivors. Below the ground, however, resides a family, sheltered in their stalwart vault. With Sheltered, developer Unicube is taking the well-worn post-apocalyptic setting, but is putting family first.

Pensions, schooling, family holidays – they are all distant memories, replaced by slavery, cannibalism, banditry and survival. Anything to keep the family going. The post-apocalypse is, all things considered, not a very nice place.

With the Kickstarter recently ending in success – netting Unicube $30,148, over double the first target – I wanted to take a peek inside the vault. I spoke with Dean Foster, lead programmer, and Sonny Meek, artist and programmer, to get the skinny on this curious survival management sim. 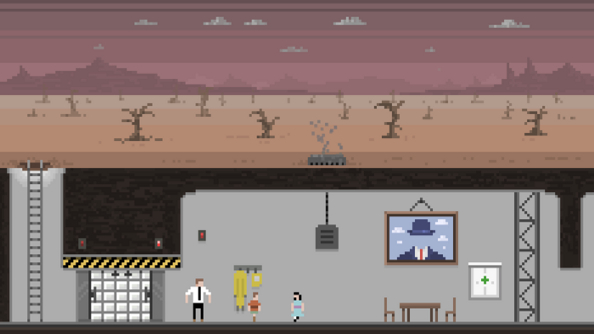 Foster and Meek want to dig a little deeper into the effects of the apocalypse, beyond the savagery and violence it would be sure to spawn. “Sure, there would be lots of violence and carnage, but what about the long-term social effects and bonds between people? We have combat elements, but for us the more enjoyable aspect of the game is the importance of family and moral decisions, and the impact it has on everyday life.”

Sheltered won’t shun all of the conventions of post-apocalyptic fiction. There will still be brutality – plenty of it – and violence, and mainstays like radiation and mutants are elements that were “too fun to pass up,” the developers say. There are things that didn’t make the cut though. “The main thing we let go was this ‘Lone wanderer’ theme that seems so common in this genre. Not to say those games aren’t fun too, but we yearned for something different.”

There will still be wandering, though. But we’re getting ahead of ourselves.

Players will be responsible for a family at the beginning of the end, hiding in a shelter. Instead of taking on the role of an individual family member, you’ll be an invisible puppet master. “You’re an invisible puppet master, for sure,” says Unicube. “Apart from when it comes down to combat situations and planning a strategy. Our main goal for this game is to make the player feel something. Most people have family, and it’s something a lot of people can connect with. If we create any emotional attachment between the player and the family at all, then we’ve done what we set out to do.”

The early screenshots on Kickstarter show one family, white and nuclear, with the father being the most prominent member. This doesn’t reflect the diversity of the game. Foster and Meek tell me that family customisation will provide different races and same-sex couples. “Another aspect we’re adamant about is breaking stereotyping. Which is another reason why you’re not controlling the Father alone. Most people make the mistake of thinking this is the case.”

Not only can the family be customised, they each come with their own traits specific to them. The developers note that they have needs that must be taken care of, and they can grow anxious and depressed. It is the end of days, after all.

While RPG-like dialogue trees mean that the conversations are controlled by the player, there are organic reactions that player actions can influence. The development of the children is, according to Foster and Meek, a good example of this. If the kids see their parents being extremely violent in combat – which is controlled by the player – then they’ll grow up seeing violence as the norm. “[T]he children are going to grow up as fairly nasty pieces of work”.

The aforementioned combat is described as being similar to Final Fantasy and D&D, and in a slightly disturbing twist, all family members can fight. This might not be advisable, though. When they’re young, the kids are a bit rubbish at fighting compared to the parents and any pets they might have, so it’s better to keep them away from violence. “Unless you want to use the children as cannon fodder…then it’s a different story.” It’s a distressing thought, using children as a meat shield, but Sheltered doesn’t shy away from showing the hideous face of survival at any cost.

The shelter, which can be expanded and customised with new rooms, furnishings and defences like landmines, it a tempting mark or sanctuary for other survivors. These wasteland wanderers can be turned away or invited in. If they join the family, then they take up space and resources, but that’s the only thing that limits how many people can fit into the shelter.

“The way we’re programmed the shelter is to be able to scroll backwards on the Z-axis indefinitely,” I’m told. “The player, with enough resources and time, could make a fairly large community.” But that’s a risk. Survivors can turn on the family, and the family can even fight amongst itself. Treachery and infighting is only the tip of the radioactive iceberg. The family is not the Brady Bunch; when push comes to shove, they can be just as savage as any bandit or crazed survivor.

Maybe it would be better for survivors to just walk by the shelter, and not wonder what is inside. They can be forced into slavery by the player, or worse, become food for the family. Sheltered is a lot more grim than its quirky pixel art facade belies.

In the Wanderer Mode, the family can become literal bandits and create violent posse. With a stronger focus on combat, the family wander through the wasteland with only a vehicle and limited supplies. They’ll fight mutants and other survivors as they move from place to place, scavenging or stealing new resources. It sounds like it’ll be safer for the rest of the world if they just stay in their shelter.

When Sheltered is released next year, that will only be the beginning, Foster and Meek tell me. “We’ll be doing this for a long time after release. We don’t just want to package it, ship it off and forget about it. We want to expand on it and nurture it. Our community forums will be a good resource for this. They’re always giving feedback and suggesting features they’d like to see in the game.”

In a genre dominated by zombies and lone gunmen, an unsettling management sim sounds like a breath of fresh air in the radioactive wasteland.