In July of last year, on the off-chance you’ve been living under a rock for the last wee while, Shenmue 3 was successfully crowdfunded via Kickstarter, racking up more than three times its initial ask to the tune of $6,333,295. Pretty impressive.

On December 24, developers Ys Net asked its supporters whether or not backer rewards billed as Kickstarter-exclusives should be made available to those who chipped in later via PayPal. A poll was held and a decision has been made which, it seems, isn’t to everyone’s liking.

RPGs are great. Have you played our best PC RPGs?

Only those who pledged $5 or above during the active campaign were entitled to vote – to which 15,110 of a possible 68,533 obliged. This is how the votes swung: 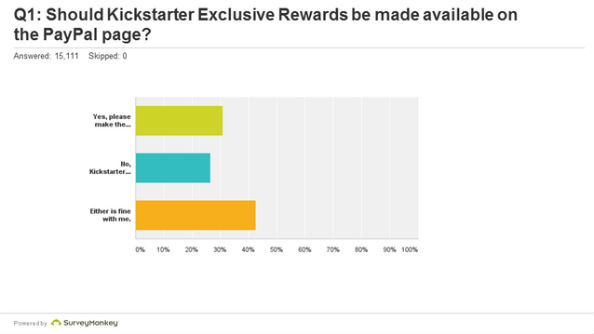 As you can see, the majority ticked the rather ambiguous third option labelled “Either is fine with me” (6432 votes); followed by those who were happy for all to share the spoils (4,670); then by those who thought the “Kickstarter-exclusive rewards are for Kickstarter only” (4,009).

Somewhat surprisingly, Ys Net has determined that the latter figure is the most important. “Considering the strong response from those of you who felt that the Exclusive Rewards should remain exclusive for the Kickstarter,” reads an update posted on the Shenmue 3 campaign page earlier today. “Those Exclusive Rewards will not be made available on the PayPal page as originally promised. Thank you all for your participation. We hope everyone will continue to let their voices be heard as we go forward with the project.”

Perhaps expectedly, this hasn’t sat entirely well with some backers, even though they’ll continue to benefit from the outcome long term. Some angry fellows have even taken to the update’s comments thread (gasp) to voice their disdain. All told, it’s a strange situation, but one which perfectly exemplifies just how passionate fans of the Shenmue series are. Either way, it reminds me just how excited I am to see more.