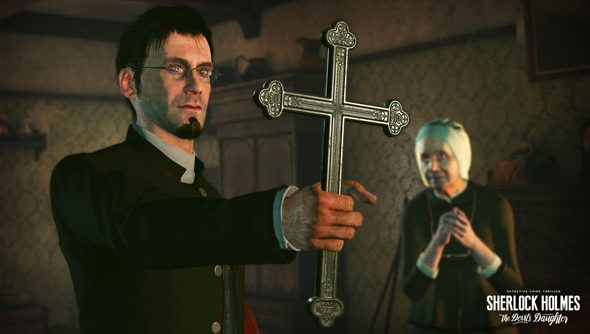 Despite Sherlock Holmes being surely the most adapted literary character in history, his presence in videogames hasn’t, until recently, been very prominent. This could be to do with the inherent difficulties in making a game about being Sherlock work in a satisfying way. On the one hand, you want the fantasy of playing as the almost supernaturally gifted detective. On the other, you want a game that’ll really push your investigative skills (and there are countless examples of games that prove just how difficult this is to achieve – LA Noire and Murdered: Soul Suspect to name a couple).

Do deerstalkers and pipes give you the urge to make gibs? The best FPS games on PC are what you need.

There’s no one more attuned to these challenges than Frogwares – developers of the long-running Adventures of Sherlock Holmes series – who seemed to finally nail a reliable formula with its last outing, Crimes & Punishments. But not content to kick back in their leather-and-mahogany smoking chairs just yet, Frogwares are expanding on that formula in The Devil’s Daughter, the ambitious upcoming outing for Sherlock.

If you watched that moody, borderline ‘Silent Hill’ trailer for the Devil’s Daughter (below), you’d have thought that the game was going for a darker tone than its predecessors. Once I started my two-hour hands-on session with the game however, any allusions to that dissipated. This is very much ‘classic Sherlock’ – which is no bad thing. Sherlock’s as tortured and arrogant as ever, while Watson has a younger, rougher and tougher appearance than we’re used to seeing. The main story relates to Sherlock’s own daughter (hence the creepy trailer), though we don’t yet know how it all ties together.

While Frogwares’ early Sherlock games were a bit hardcore and esoteric to enjoy widespread appeal, recent outings toned down on the detective work to focus more on characters, conversations and of course the main man himself, taking a page out of Telltale Games’ book to deliver a solid interactive story.

With this, Crimes & Punishments lost some of the challenge of crime-solving. Yes, gathering clues and piecing them together to come to different possible conclusions was satisfying and brilliantly presented, but for the most part they didn’t require too much brainpower. From my playtime, I can ‘do a Sherlock’ and deduce that Devil’s Daughter is aiming to reinstate more investigatory challenge to the series, while targeting a wider audience by throwing in elements of gameplay we associate more with Assassin’s Creed.

But with so much going on, is Devil’s Daughter at risk of spreading itself too thin?

The first difference that’s evident as soon as you step out of Sherlock’s familiar office onto the street is that – well- you’re stepping out onto the street! Up until Crimes & Punishments, the action in the series was always confined to small distinct areas relating to your investigations, but now you can go on merry constitutionals of Victorian London as you wander between objectives. 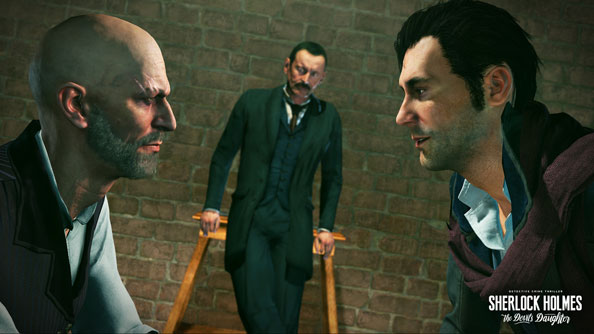 This seems like a natural step forward for the series, but it does raise the question of whether it makes Devil’s Daughter feel less tight and briskly paced than its predecessor. Several of my objectives entailed me walking the streets of Whitechapel looking for the right door numbers, and once I actually managed to get lost. However, I attributed this to my years of abusing Google Maps instead of relying on my own navigational intuition, and the areas I visited weren’t generally too vast or confusing.

Once you discover a location, you can fast-travel to it, alleviating any concerns about time wasted by bumbling around. The streets are pretty lively too, with the common folk of East London chatting, and going about their cockney business – selling fruit, shining shoes and sweeping door steps (as opposed to running sourdough pop-ups and artisanal kale cafes – how times have changed). These explorable segments create a welcome sense of time and place where in previous games it was missing.

The open world design is one of several decisions by Frogwares that hints at the developers’ desire to make The Devil’s Daughter tick those triple-A boxes, expanding the game’s focus out from story and crime-solving into the popular realm of stealth gameplay. 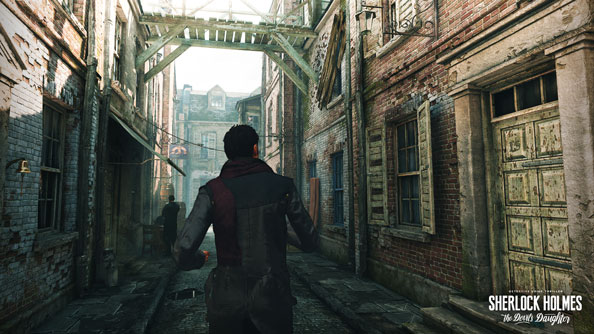 It’s a risky move by Frogwares, and its dangers are revealed when you play as Holmes’ eyes-on-the-street, the young boy Wiggins. Your goal here is to follow a man Holmes believes is relevant to his case, and you do so for about 15 minutes in a drawn-out sequence which brings back all the hours slogging through the Assassin’s Creed series’ eavesdropping missions – minus the parkour.

You need to keep a safe distance from your target, then hide behind a clearly demarcated piece of cover when he does that typical 180-degree turn to see if he’s being followed. The monotony is broken up a bit by a couple of street urchin mini-games, which include shoe-shining and chimney-cleaning (all that’s missing is a rhythm-based minigame where you do an Oliver-style singalong down the street – complete with heel-clicking Bobbies and stocky fishwives synchronously pouring buckets of waste out of second-floor windows).

A much more successful implementation of triple-A gameplay trends (in this case, animal mind-control) comes when you have to follow a scent as Toby, Sherlock’s dog (complete with what you imagine instrumental ‘silly dog music’ sounding like) – it’s short, it’s sweet, it doesn’t detract from the game’s core strengths of story and investigation. 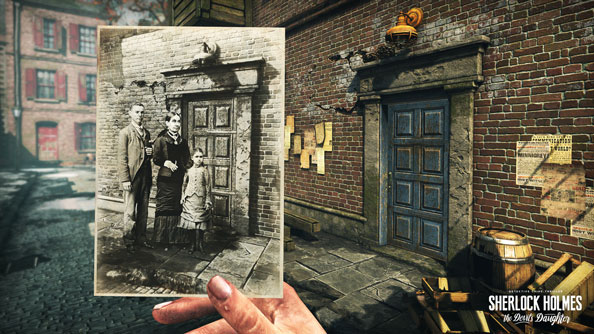 On which note, the solid investigative gameplay of Crimes & Punishments has been retained and improved upon. The dialogue options are more varied, crime scene investigations force you to be perceptive but not eagle-eyed, and the clue-assembling system still uses that slick neural map screen – where you make connections between disparate bits of evidence before eventually coming to a conclusion.

You’re still led on to an extent by Sherlock’s deductive skills, but Devil’s Daughter introduces at least one new way of making irrevocable mistakes. The character assessments – where the game pauses and you scan a person’s appearance for clues about their personality – are back, but now with the possibility of failure. When I snobbishly dismissed a boy who’d been crying and had an injured wrist as being a sickly little runt with conjunctivitis and a wrist malformation, I couldn’t go back on my judgments, and ended up missing out on information that could’ve proved important when drawing my conclusions.

Where before the series felt about 70% interactive story, 30% detective game, Devil’s Daughter ups the detective elements to good effect, which become even more pronounced when you use the new ‘Master Sleuth’ difficulty setting, which removes the elements that made Crimes & Punishments such a forgiving game – such as skipping minigames, reviewing your conclusions and other hints about clues in the environment. 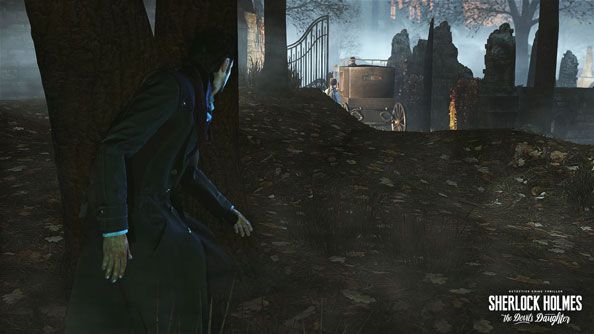 A Sherlock game is never going to easily fit into existing genres, and the evolution of this prolific series, which began life as a pre-rendered Myst-style adventure back in 2002, has seen it arrive at a point where it’s almost created a genre unto itself. It finally seems to have arrived at something of a resting point, for the most part striking a good balance of challenge and narrative charms. Devil’s Daughter is certainly more similar to its predecessor than any other game in the series, but even so it’s still tinkering around with that eternal balancing act between Sherlock Holmes fantasy, investigation game, and something a little more mainstream.

The small foibles in my hands-on were mostly nullified by excellent writing, intriguing detective work, and a polished version of the crime-solving mechanics that made Crimes & Punishments something of a breakthrough for the series. Devil’s Daughter is testing new boundaries for the series – some of which work, while others don’t. On balance, there are enough great ideas here to hopefully make this Sherlock’s greatest videogame outing yet.

But for the love of Sherlock’s deerstalker hat, can all games please keep abolish tailing missions once and for all?