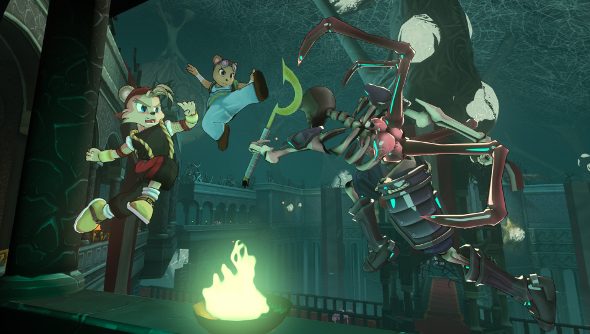 Shiness: The Lightning Kingdom is a Kickstarted JRPG featuring an anthropomorphic animal lad in a vibrant, colourful fantasy world. Visually, it’s evocative of a Studio Ghibli production, but the folks at Enigami have been inspired by a broad array of games, manga and anime, from Street Fighter to Naruto.

Will Shiness be good enough to earn a spot in our list of the best RPGs on PC?

The diverse list of media that it draws from also offers some hints about just how ambitious the Kickstarted RPG is: one moment it’s a JRPG, then it’s a fighting game, then it’s something more akin to Zelda or a Metroidvania title. It’s a melting pot of ideas, systems and genres, and it’s bewildering that it’s all being made by an indie dev after only a small – though successful – crowdfunding campaign. 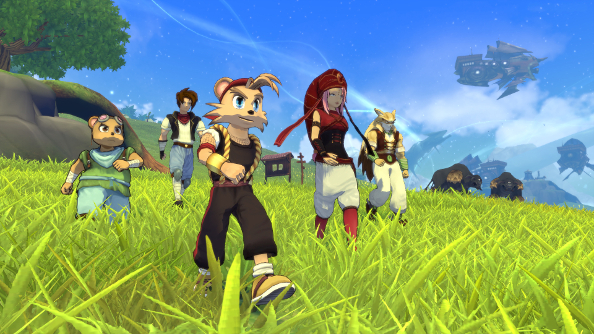 When I first witnessed the game in action I thought I knew what to expect: a cute JRPG with a spot of exploration. Then the first battle kicked off and I sat up straighter.

Street Fighter, Marvel vs Capcom – these aren’t the usual games conjured up by a role-playing fighting system, but Shiness is different. Enigami have taken the fast, tactical scraps from 2D fighters and plonked them inside an RPG, and the result is one of the most interesting battle systems that I’ve seen in the genre.

Bouts take place in magical arenas. When an enemy is engaged, glowing, coloured boundaries pop into existence, marking the limits of the battlefield. They’re important, and not just because they keep fights more focused – the colour of the barriers have a significant impact on the brawl. If the barrier is red, for instance, then the arena has a fire affinity. The result: fire abilities are stronger, while water abilities are weaker.

These barriers aren’t just random, either. If you’re fighting an enemy near a waterfall, for example, then chances are that the barrier will be blue. An ability can be unlocked that lets the player change the colour, as well. So in a fight with a fire-based foe, you might want to change the colour to blue, so the enemy’s fire attacks are weakened and your water attacks will do even more lovely damage.

Punching and kicking foes generates resources that can be spent on firing off spells or special, fighting-game inspired techniques. During the demo, one of the developers pulled off a devastating move and, as the input came up on the screen, I had to ask: where do I recognise that move from? Apparently it’s from Akuma, and fighting vets should be able spot several combos that they’ll remember from Street Fighter brawls.

It’s a party-based game, so not just one character against the world. In combat, however, the party doesn’t fight together. This is where the Marvel vs Capcom comparison comes in. Allies that aren’t in the fight can be tagged in, jumping into the fray with their own set of abilities and techniques. Maybe they’re better at earth abilities and the fight’s taking place in an earth arena. Perhaps they’ll just be in the battle for a moment, to fire off a spell that will help another character. While they’re on the sidelines, they can still help, as well, as tactics can be selected to make them help with healing or changing the arena colour.

There’s a lot to wrap one’s head around. While a fighting game is full of systems to learn, Shiness has all of them and a whole bunch of extra elements like spells, levels, unlocks and menus to pour over. It’s not intimidating, though. It should be, I think, but a combination of the light tone and the fact that it draws a lot from other classic franchises makes it surprisingly welcoming. 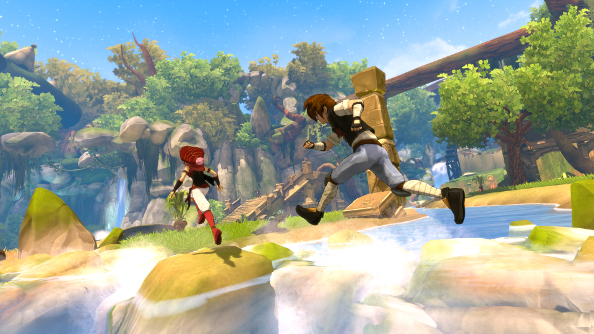 Fighting just feels natural. Since the arenas are 3D, they offer more space than most fighting games, but the basic principles remain the same. For those not versed in fighting games, and so possibly not used to worrying about timing attacks perfectly and input accuracy, the elemental affinity system is a massive boon. It means you can use sly tricks to keep you kicking ass while you practice your fighting skills. And since it’s an RPG, abilities and techniques will be unlocked over time instead of being flung at you all at once, giving you time to get to grips with them before learning a new one.

Enigami are hoping that the battle system will appeal to hardcore fighting fans just as much as lovers of JRPGs, but they’ve added some extra incentives to explore its intricacies even if you aren’t immediately convinced. There’s the ranking system, for one, which encourages players not to be terrible by offering better loot for greater ranks. And then there are the challenges: they dole out special rewards for completing specific battle objectives.

While being able to duke it out in nuanced, kung-fu scraps is undoubtedly Shiness’ big hook, Enigami are lavishing just as much attention to the rest of the game. The world, a series of floating islands, is a pseudo-open place, is explorable in the Zelda-style, where routes and paths might be blocked with obstacles that can be overcome using the party’s special abilities and by solving environmental puzzles. 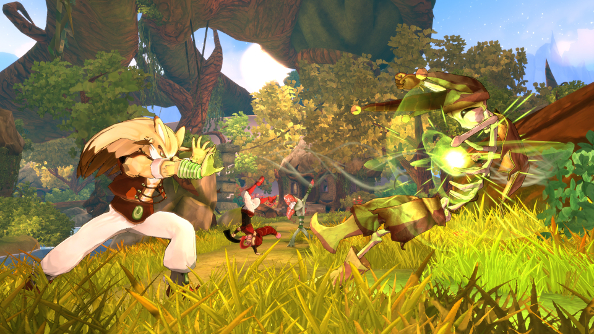 Chado, the protagonist, can use his affinity with the earth element to summon a giant boulder, for instance, which can be tossed or dropped in certain places to open up new routes through the island. His pal, Poky, uses a tool instead: a very fancy wrench. Imagine the sonic screwdriver from Doctor Who, and then imagine it’s a wrench and you get the idea. Poky can use it to repair machines, influence magnetic fields and, in a fight, pull himself toward enemies.

Enigami have even developed a new language for the game. A pair of PhD linguistic students at the University of Bordeaux created the language, which includes its own grammar, vocabulary and dictionary, so if players want to learn what the name of a town or an area means in English, then they can swot up.

The only hint that Shiness isn’t being developed by a large, veteran JRPG studio is the length. While Enigami promises a meaty game, they’ve eschewed the bloat that so many modern RPGs consider a feature, and expect players to spend around 30 hours exploring the world, not 100. Otherwise, it seems just as rich in scope as a game in the Tales or Final Fantasy series.

Shiness: The Lightning Kingdom is due out this year.