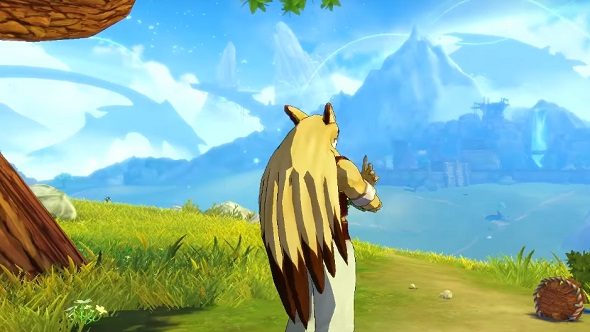 To give its release date reveal a suitable fanfare, Enigami and Focus Home Interactive have shown off a new musical trailer for Shiness: The Lightning Kingdom. Set on the ruined planet of Mahera, this action RPG plays tribute to JRPGs from the PS2 era, with its cel-shaded art style and cast of colourful characters.

If you’re looking for more roles to play, check out these great PC RPGs.

Shiness: The Lightning Kingdom follows the adventures of Chado and his comrades, who finds himself embroiled in a power struggle between kingdoms following a crash landing in enemy territory. Using the power of Chado’s magical spirit friend Shiness, the party must work to unify the peoples of Mahera and become their champion.

While the art style and story are clearly inspired by RPGs like Dark Cloud, Rogue Galaxy and Skies of Arcadia, the combat system of Shiness takes most of its elements from 3D fighting games. With combos, parries, blocks and even super moves, battles in Shiness look like something you’d see in a spectacle fighter, rather than your standard action RPG. Each character has their own unique magical abilities like telekinesis or the ability to summon tornados, so fights will get pretty manic pretty fast once you get to the higher levels.

The music is of the era as well, emulating that whimsical atmosphere with its use of strings and woodwind. Hopefully, its battle theme and overworld music is as memorable as some of those classic PS2-era RPGs.