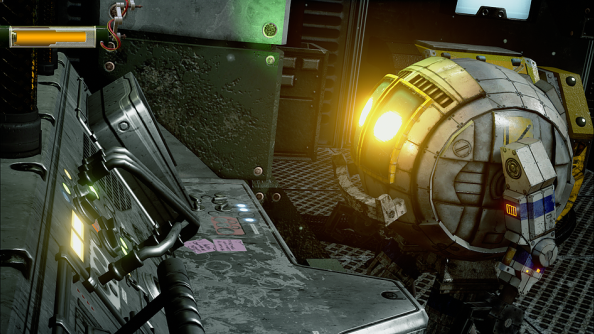 If you’re putting together an atmospheric platformer that smuggles in an environmental message under cover of a cute, cartoon protagonist, you could do worse than make an ally of Oddworld creator Lorne Lanning.

There are some cracking platformers among the best indie games on PC.

Garage227, the Brazilian first-time developers behind Shiny, called Lanning a couple of months ago – before travelling to LA to meet him for drinks.

“We became close,” recalls Garage227 co-founder Daniel Monastero. “He’s great, and he loved the idea that we were doing something special that is about saving others and not destroying and killing.”

Shiny’s premise resembles that of Pixar’s consumerist fable Wall-E, in that it concerns a planet on its last legs – abandoned by humankind and left to second-class robots. But the planet’s problem isn’t so much waste as energy: it’s dwindling, and the robots are dying. Kramer 227, a “blue collar worker” who also happens to be a machine, refuses to accept his fate – becoming the player character in a platformer instead.

“At the beginning of the game Kramer gets the power to save others and he decided to use all the energy he has to save his friends that were abandoned by the humans,” tells Monastero.

At the end, he confides, the robots will come together to build a spaceship. This is a story about somebody who comes into the possession of a lot of power and keeps none of it for himself.

“What you do with that energy, if you want to survive and be free, is share it with others who are dying and don’t have the power you have now,” preaches Monastero. “We think there’s a message there if people want to look for it.” 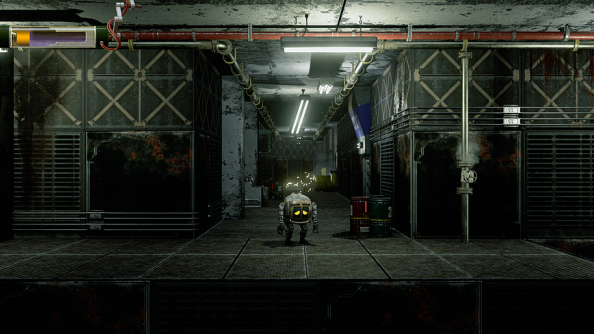 The sentiment is borne out in Shiny’s mechanics. Where other platformers tend to be about the unrestricted freedom of movement, this one is about energy conservation. Every jog and jump drains your supply, until you can reach a generator – Shiny’s checkpoints – and re-charge.

Generators have a limited number of charges, and batteries found in the world don’t reappear after death – so players are punished for trial-and-error recklessness, and encouraged instead to move with purpose.

“The better you are at playing the game, the more energy efficient and aware you become,” says Monastero. “In playtesting, we noticed people started to play better and focus more on exploring to see if they could find generators and robots. It’s not a limitation – it’s something that gets the game ticking and keeps you moving forward and saving people.” 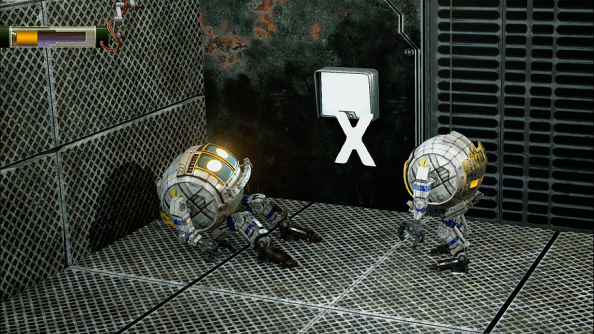 Monastero cites Rayman Legends, not for its freewheeling slapstick but for the fact that the limbless wonder is “saving characters, trying to have fun while doing it”. When Garage227 were setting up shop, he and his partners – all in their 30s – kept coming back to the platformers of their youth. The genre provided them with an opportunity to explore the design identity of their new studio in a clean, straightforward way.

“A platformer has to be balanced properly – the highs, the lows, the space to breathe, the challenges,” reasons Monastero. “We thought we could give it a shot, learn by doing it.”

With only seven developers on staff, they picked Unreal Engine 4 for its art pipeline, and especially for its rendering and shaders. Shiny’s world is conveyed through ambitious 2.5D backgrounds – underground caverns and dead machinery that drift by in parallax.

“If you open the engine you see how huge the levels become,” laughs Monastero. “Because of the depth of field of the camera, something that’s very small on the screen is huge. We put the character on the background sometimes and he’s like a little ant walking around.” 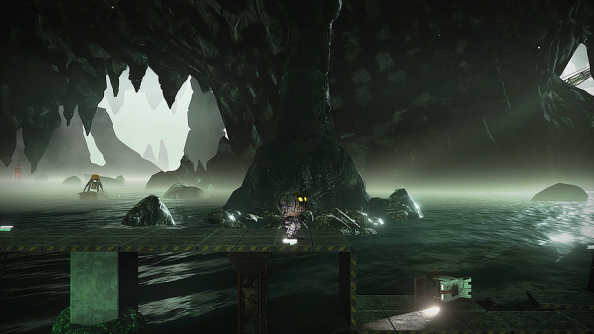 When that spaceship leaves the atmosphere of the dying planet, Garage227 want players to remember that “life and energy is limited”. It’s a message that’s become more than a little autobiographical as Shiny edges towards its 2016 release.

“We only have so much time and money to make a game,” laments Monastero. “Our passion is greater than our resources.”

Shiny is coming to Steam in 2016. Unreal Engine 4 development is now free.

In this sponsored series, we’re looking at how game developers are taking advantage of Unreal Engine 4 to create a new generation of PC games. With thanks to Epic Games andGarage227.