Let’s be honest – we’re all secretly a little bored of being a big warrior with a big sword slaying big dragons in a big fantasy world, aren’t we? Why can’t we be the dragon instead? That would be cool. Imagine all the melted faces! There’s a lot of potential in flipping the role from hero to the mythical creatures we usually slay. Well Shoppe Keep lets you live out that fantasy… sort of.

Out now on Steam Early Access, Shoppe Keep puts you in charge of a weapons, potions and apparel store in a fantasy land. You won’t be melting anyone’s face with your fire breath, but you will pick out fancy armour for a spelunking adventurer, or select a heat-proof shield for a brave, dragon slaying knight – all in first-person. 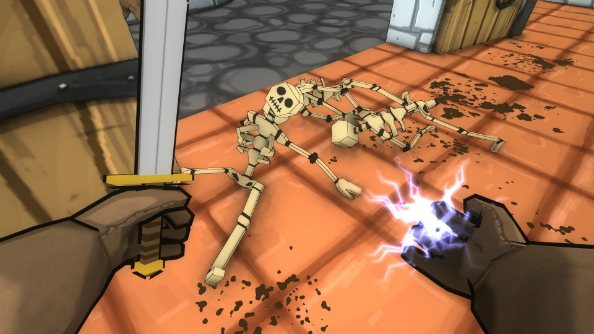 As well as keeping heroes stocked up, you have to install shelving, racks and tables, order supplies and set prices. There’s a hint of Viscera Cleanup Detail in there, too, as you have to sweep up mud trailed in by iron boots and repair damage done by heavy, gauntlet-equipped hands. When all else fails, you get to zap thieves with a lightning spell. If you think it sounds interesting – even though you can’t melt anyone’s face off so only the skull shows underneath – you can try it out now for £3.99 on Steam.

Watch the announcement trailer below: