Today AMD release a new graphics card into the market, coughing and spluttering and taking its tentative first steps in a marketplace that hasn’t seen a lot of activity in 2015. The Radeon R9 380X arrives just in time for Black Friday – and indeed, Cyber Monday – and it’s priced competitively at $229. But what are the changes under the hood that distinguish the 380X from a plain old 380? Or indeed, from the pricier 390 and 390X? And above all, should you take the bait and buy one for your system?

More of a Team Green gamer? Check out our GTX 970 group test.

The top line of the R9 380X is that it’s the first fully unlocked GPU model from AMD’s Tonga family – the company name all their GPUs after islands. Tonga features Graphics Core Next 1.2, the much-touted architecture that AMD claim gives thier cards an advantage in DX12 applications because it supports asynchronous compute/shader tasks at a hardware layer, rather than at the driver layer as with NVIDIA’s Maxwell cards. There is, however, voluminous and spirited debate between the two companies about the validity of those claims, so I’ll leave it at that.

Speaking of NVIDIA though, both its pricing and performance position it between the GTX 960 and 970 – hotly contested territory. It should also be clear, though, that its launch doesn’t shake up the market a whole lot. The lines have been drawn since January this year, and rather than offering something new from their more powerful Hawaii GPU family, AMD have elected to try plugging a hole between two established price point with an unlocked SKU of an existing architecture instead. 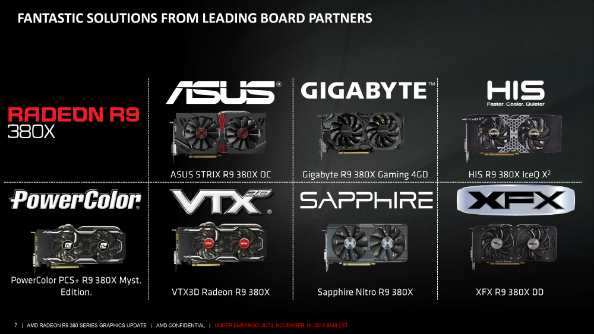 Well, except when you scan as far down the spec sheet as the memory. The R9 380X is kitted out with 4GB of VRAM, 2GB more than the 380. AMD say that makes it a good entry-level 1440p card, but as has been pointed out elsewhere it’s probably not powerful enough to unlock 60fps gameplay at max settings at that resolution, particularly in the more demanding titles from 2015’s crop – The Witcher 3, Ashes of the Singularity et al.

More recent games have been especially demanding on VRAM as there’s such an abundance of it in console environments, the PS4 for example operating with 8GB shared GDDR5 memory. As developers increasingly work to that figure in cross-platform development, 4GB is becoming the bare minimum for high-detail gaming. More realistically, the R9 380X will give you great performances at 1080p, and allow you to whack up the detail settings a bit. Based on AMD’s data, it appears the 380X offer 10% better performance at this resolution on the 380.

AMD’s partners are rolling our their own versions of the 380X at the same time the reference card releases, which means the likes of Asus, Gigabyte and others already have cards on the market. Most appear to be using cooler designs they developed for the 380, and why not? The cards are so similar, it makes sense.

So, should you take the plunge? If your current GPU’s from 2012 or thereabouts, it’s a good option. However, differing SKUs from both AMD and NVIDIA are so tightly packed together at the moment in pricing that it’s impossible not to recommend shelling out a bit more cash for the superlative GTX 970. It appears the 380X does a great job of offering value and performance at its specific price point, but when the price difference between SKUs is as little as $50 – as it is pretty much from the $150-$450 zone currently, you’ve really got to decide your absolute upper limit and go with the card closest to it.