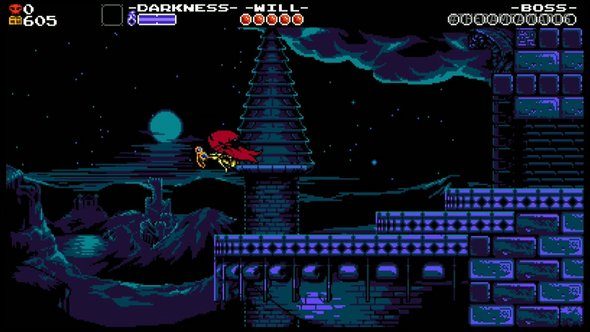 NES throwback Shovel Knight ruffled many a nostalgic feather back in 2014 when it was released on Steam, quickly gaining a lot of praise from both critics and gamers. It has since seen the release of the Plague of Shadows campaign, allowing players to take control of Plague Knight and work against Shovel Knight’s order. Since then, fans have been eagerly awaiting the sequel. So like a knight rescuing a maiden in distress, developers Yacht Club Games revealed yesterday that they have now completed development on the third installment, Specter of Torment and will be aiming for an April PC release.

Prefer your retro to be a little more legitimate? Then check out our list of the best old games on PC.

Specter of Torment will take place prior to the events of Shovel of Hope (the add-on campaign for the main game) and focuses on Specter Knight, who is sent to recruit knights to join the Enchantress’ Order of No Quarter. Along the way, he’ll also experience flashbacks of when he was still alive, and how he came to die and become resurrected by the Enchantress. Players can expect lots of platforming goodness and awesome chiptunes.

The original Shovel Knight can be grabbed on the Steam store right now for $14.99/£10.99. You can also check out Spectre of Torment’s official page for more chivalric enjoyment.