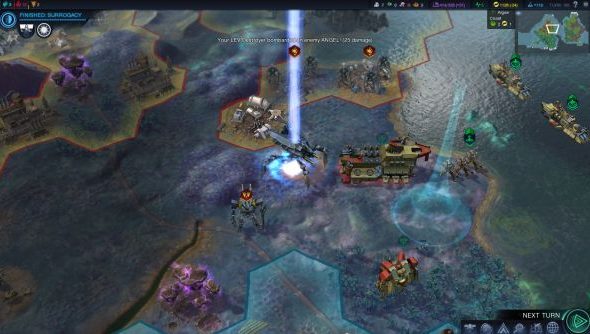 As part of the run up to the release of the Rising Tide expansion for Beyond Earth, Firaxis have made the base game free on Steam for this weekend. It should run out in about 24 hours. If you miss it, there’s also a demo that lets you play 100 turns. It’s also on sale for that period, along with The Collection bundle that gives you Beyond Earth, its DLC pack of premade planets and a pre-order of Rising Tide.

There’s also been some trailers released for Rising Tide in the last week. The feature run-downwas accompanied by a livestream showing off the new German-based faction, INTEGR. Here’s the archive of over an hour of footage, which also serves as a good break down of the new Diplomacy system:

Rising Tide hits on October 9th, so there are a few more reveals to go before we get in. You can pre-purchase it at 10% off for £22.49, but if you weren’t too impressed by the original version I’d wait for reviews. Firaxis are usually pretty good for getting code out before release day and that pre-order offer will still be running by that time.