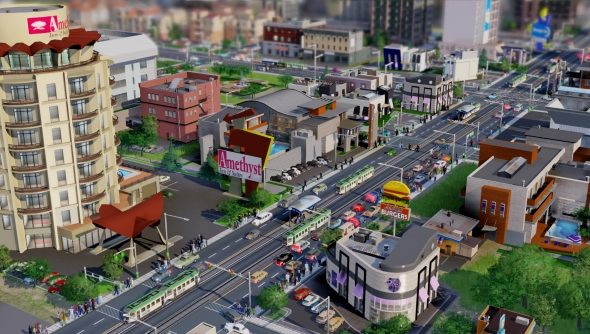 Christmas is not only a time for remembering, but also a time for forgetting. No not forgetting, sorry, I mean looking ahead. So let’s take a look at some of the most anticipated PC games of 2013, the upcoming high notes in the operatic aria of the next twelve months. SimCity is, personally, rocking my anticipation gland to the degree that I require medication to prevent it rupturing in my sleep, so I asked George Pigula, associate producer on the game, all about it. Specifically, for some reason, all about homeless people.

PCGamesN: You guys have spoke about homeless people living in parks in SimCity, is that partof a broader system? Do poor sims end up homeless?
George Pigula:Homeless people are part of the Glass Box engine’s detail in the simulation. It’s one of the ways that the game pushes back against you. You as a mayor are responsible for providing not only homes but jobs for your residents. If there are no jobs in your city, or in the cities around it, then you’re going to end up with homeless people in the streets because they won’t have enough money to stay in their house. What they’ll do, especially if you have parks, is that they’ll start congregating around your city. That will bleed into some other systems and cause a bit of a downturn in your city. It’s one of the problems you’ll have to deal with as a mayor.
PCGN: We’ve seen that you can trackindividual cars and other vehicles, but can you track individual sims and their families?
GP: Yeah, you can actually click on the sims as they’re walking down the street. They’re not as much fun to watch travel along curvy roads, they’re a little bit slower than cars, that’s why we haven’t shown that. But what you’ll be able to do is follow them to see which public transportation they use, you’ll see them sitting at streetcar stops, they’ll get on those and head off to work or back home. Just like cars, you’ll be able to follow them around.
PCGN: Do sims age? Do they grow through generations? Or are they just static units?
GP: They’re not static units per se, right now Glass Box isn’t tracking their lifespan. It’s not The Sims 3. I’ll say it’s not that detailed. PCGN: When you were demonstrating the transit system we saw you placing bus stops manually. Can this be automated, are there benefits to doing it by hand?
GP: That’s manual, that’s something you’ll do. When you place down the bus station, the buses won’t know where to go. It’s really up to you to manage that traffic system, it’s one of the games within the game, and a strategy you’ll have to manage. And not only just bus stops, but the streetcar stops as well. If you place stops just around residential areas, your sims won’t use them because they’re not going to take them anywhere they want to go.
PCGN: How much research did you guys do into traffic systems?
GP: That’s something our designers do a lot of. They dig in deep. In the presentation we show how you can see the radius around a bus stop representing the distance a sim is prepared to walk in order to reach it. That’s something one of our designers researched, that people will walk on average 400 metres to reach a bus stop. He found that number in city planning research guides. The designers look into real world statistics and what real world city planners do and they incorporate that into the game.
PCGN: Can a city sprawl extend far enough that two cities in a region will touch?
GP: No, but cities will touch through their transportation systems. The regions are really large, and the city placements are enough that they won’t ever butt up to each others.
PCGN: Which real-world cities did you look at for each specialisation?
GP: I don’t think I could actually limit it to single cities. I think the whole team, during the research and design period of the game, looked at cities all over the world. Yeah, we did look at the big cities like Vegas for the gambling specialisation, for example, but we pull inspiration from all over the place, from every major city around the world. PCGN: Are there scenarios, as seen in the original games?
GP: We’re not setting up specific scenarios in this game, we’re providing the tools for players to do that. So with the multi-city play you can play a city in three ways. You can build a city by yourself, or you can can play with friends, you can build a city and then abandon it so that your friends can then take that over. But there are also challenges and leaderboards, where it’s more of a global thing. We look at the real world and we might say ‘right now there’s a lot of people unemployed’, so we’d get the SimCity community to create a lot of jobs that week. Those are, I guess, what you’d call the scenarios, but players can create their own for each other.
PCGN: How is your region populated with other cities? Do friends choose to share a region beforehand, or is it automated?
GP: So you can set up a region and play by yourself by making it a private region. But even if it’s private you can send out invites to friends to come claim cities or start cities in your region. Or you can make your region public, which means it’s searchable and anybody can come in. They might, for example, hate coal-power, see that you’ve specialised in coal-power in your city, and then be able to go and build their educational utopia while buying all theirpower off you.
PCGN: When you were demoing the game, your city became flooded with police cars — what went wrong in that instance?
GP: So what that was, and I hate to knock my own city building skills, that was me failing a little bit at transportation in that area of the city. I focused on my nice casino strip, things were flowing nicely, tourists were coming in, but in my downtown I had upgraded too quickly. My police were caught up in traffic. I’d neglected that part of the city, there were too many citizens there and the police were all trying to respond to the criminals within that crowd.
PCGN: Do police cars chase criminals, or is it a case that if a criminal and a police car meet they’ll almost cancel one another out?
GP: No no, there are actually events. When you bring up the police data layer you’ll see little red faces going around. Those are actual criminals driving around the city, but they’re not committing crimes. The police have to respond to them, in the data layer you’ll see what is effectively the car’s ‘vision range’, and they’ll respond to crimes within that range. So when a crime happens the police have to get there in time to catch them in the act.
Then you also have other factors such as: now you’ve arrested a criminal, do you have enough room in jail? And if you don’t, does a neighbouring city have enough room in their jail? So all of those things factor into criminal behaviour.
PCGN: And what sort of crimes do criminals carry out?
GP: Right now we’ve shown just basic robberies and mischief, but there’s also spraypainting, tagging andgraffiti.

PCGN: Thank you very much for your time George Pigula, and have a merry Christmas.