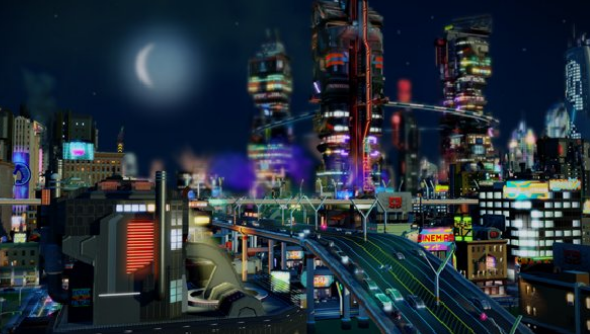 Blade Runner is set in 2019 and depicts a city of towering monolithic superstructures that house district-sized populations and bathe the ground beneath them in gaudy neon colours. We’ve only six years left until that vision of Los Angeles is upon us, but you’ll be able to make it much sooner in SimCity’s upcoming expansion: Cities of Tomorrow. The expansion pack will also include every other staple of the dystopian skyline, including massive clouds of infectious fog and surveillance drones.

A future hell city doesn’t have to be on the cards though, as IGN have discovered in their preview of the expansion. You can build utopian buildings as well, with a design aesthetic similar to Mass Effect’s Citadel. Each of these new mega structures can be built eight stories high and topped with a unique module that will buff the surrounding area with positive stats. The building themselves act like Judge Dredd blocks, housing tens of thousands of sims.

The structures can be interlinked with sky bridges to produce the perfect sci-fi landscape. The view from up there will no doubt be terrific since garbage atomisers will wipe rubbish out of existence, so everything will be neat and tidy. There won’t even be any unsightly chimney smoke since the world can be powered by green electricity via hydro-electric plants.

Well, there won’t be unsightly fog should you remain pure and incorrupt. But being the money-grabbing capitalist mayor that you are, you’ll undoubtedly strike up a deal with the shady OmegaCorp. This mysterious company can provide you with incredible profit boosts based on the use of Omega, a strange source of power that pumps great clouds of purple smog into the air. The smog infects areas around it, increasing profits and maximising production. The viral nature of Omega can even spread from city to city. Sounds great, but it all comes at a cost. Become too dependant on Omega, and a shortage could destroy your city.