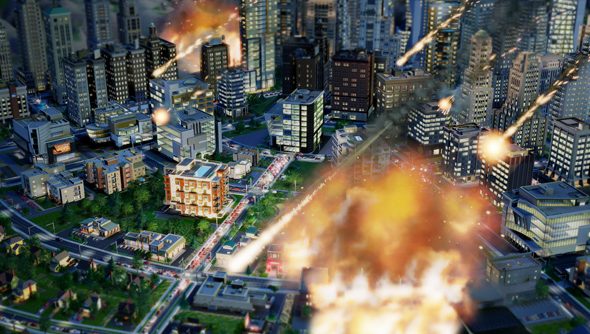 One of the most contentious issues surrounding SimCity is the constant internet connection (second only to the noticeable lack of King Kong natural disaster button). The latest trailer from Maxis goes some way to explaining the possibilities a constant connection allows. It also shows off how easy it is to develop a building, adding extensions and new functions to the facility.

You may recognise a couple of frames as the screenshots I posted yesterday.

The region set-up, that lets you claim land plots or leave them for your friends to move in, is a nice little feature. It maintains the singleplayer component of SimCity but also allows for a community to foster. Though, I wonder what that means for city size. Those plots of land didn’t seem all that big and, even if you did claim all the plots surrounding your starting city, are smaller towns as much fun as a mega metropolis?

Something the video does engender is a sense that building feels good. Listen to that noise whenever a building is placed or a new wing added to a building, it’s such a satisfying action: there’s the visual drop that almost looks like the building it throwing itself into bed; and the sound of it too, that whump noise. Ooh, it gets the city planner in me cooing.

There was something else, too. Something I hope we all picked up on. At the point where we’re being told that you can spot when there’s a crime problem because you can see graffiti: {"schema":{"page":{"content":{"headline":"SimCity footage shows cities working together and how your friends can save you from a meteor storm","type":"news"},"user":{"loginstatus":false}}}}