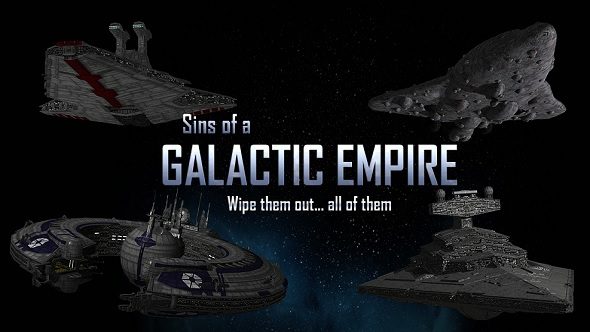 Acting as the dedicated Star Wars conversion mod for Ironclad’s Sins of a Solar Empire: Rebellion, the team behind Sins of a Galactic Empire have finally released the final version for players to download. This release adds full map creator support, more unique ship assets for dedicated ship builders, along with black holes, K-class planets and a host of balance changes.

This extensive mod adds six new factions to Sins of a Solar Empire. These include the CIS and the Republic from the prequel trilogy, the Rebel Alliance and the Galactic Empire from the original trilogy, along with the New Alliance and the Yuuzhan Vong from the Star Wars Extended Universe. As you can tell, Sins of a Galactic Empire does not follow the path that Disney took with the new Star Wars trilogy and the retconning of the Extended Universe, so don’t expect any ships from the Force Awakens in this mod.

All of these additional factions have their own tech trees and unique units which includes capital and super capital ships. While massive ships like the Super Star Destroyer are available to build, the Death Star is not as it would make the Empire way too powerful in a match. Bothans and suicide squads need not apply.

Sins of a Galactic Empire also changes the pace of space battles and ship handling in order to match the fleet clashes seen in the Star Wars movies. In the playthrough above, you can see the scale of these battles, with fights potentially going on for hours as capital ships fight for control of planets. The mod also contains music and artwork from the Star Wars series, so battles between the Empire and the Rebel Alliance can feel suitably authentic.