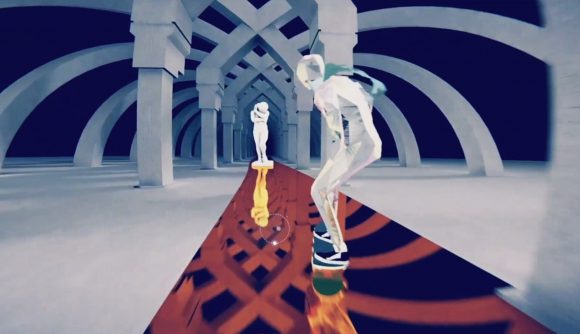 Skate Story is one of the more distinct takes on a skateboarding game. Far from the arcade, platforming-like feel of the Tony Hawk’s series, it turns skating into a beautiful, abstract exercise in patience and serenity as you skate down strange hallways towards the horizon. A new trailer demonstrates the precise nature of the controls that go into the tricks you can pull.

Essentially, every button on your controller is for a specific body movement. The left-stick moves your body side-to-side, the right stick lets you crouch and pop, and the A-button, assuming you’re using an Xbox controller, causes your foot to push the board. Doing an ollie is as simple as getting the momentum, then crouching and popping up by pushing the right stick down-and-up to create the jump. From there, doing more tricks, like a kickflip, becomes an exercise in finding the right combo and timing.

There’s a real science to skating well, to nailing that flow, and Skate Story seems all about the grace of the sport. It looks like all you’ll need to know are ollies to get past many of the obstacles, but getting the angles and speed right on an ollie every time, that’ll be the challenge.

Made by Sam Eng, Skate Story only looks more intriguing with each trailer. The premise is you’re skating out of the underworld, a person hell of some sort. Part art-piece, part endless-runner, and part skating-platformer, it’s definitely not your average skating experience. Unfortunately, we still don’t have a release window – or a Steam page, for that matter, just the official site.

The trailer comes as part of the Guerrilla Collective, a multi-day celebration of indie games. We have a round-up of everything from the first day’s festivities, as well as the PC Gaming Show, and Future Games Show. If you’re eager for skating action on PC, a remaster of the first two Tony Hawk’s games is coming in September, and Skater XL is due to move from early access to full release in July.