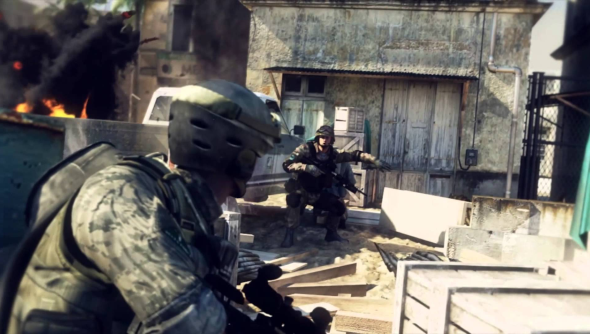 Cast your eye over 2015’s release calendar and you can see we’re in for a treat of a year. Look at the system requirements, though, and it’s enough to make you weep.

What you need is a powerful PC, one packing an Nvidia’s Geforce GTX970 and an Intel i7 processor. Thanks to Gameforge, we have one to give away. For it to be yours you have to answer a simple question: what does S.K.I.L.L stand for?

The PC Gameforge have sent us really is a wonderful machine. On the graphics front you’ve the Geforce GTX970, one of the most powerful cards in Nvidia’s lineup. It should have no trouble playing any game released this year or next.

The i7 processor, partnered with the 8GB of DDR3 RAM, means it should run faster than a speeding bullet whatever the task.

Here are the full specs of the PC:

Gameforge has supplied us with the machine to give away in time for the Allstars Cup 2014 which takes place on January 24 in Cologne.

S.K.I.L.L’s a free-to-play shooter from the Counter-Strike mould. Its blast mode, for instance, which is what will be played at the Allstars Cup, pits terrorists against counter-terrorists in a race to blow up a target or defuse the bomb. You can register and download S.K.I.L.L through Gameforge’s website.

The contest sees eight teams going head to head for a chance to win (at the time of writing) just short of €20,000. Gameforge supplied the first €10,000 and the community have been adding to the prize pool by buying in-game capsules.

To win this PC you need to tell us what S.K.I.L.L stands for. The winner will be who we judge is the funniest answer.

Write your answer in the comments below. And we will announce a winner in line with the Allstars Cup on January 24.

Update: Aaaaaand we’ve found our winner. Congratulations, Fattox. Your definition of S.K.I.L.L – “Superior Knack In Losing Less” has won you a PC!