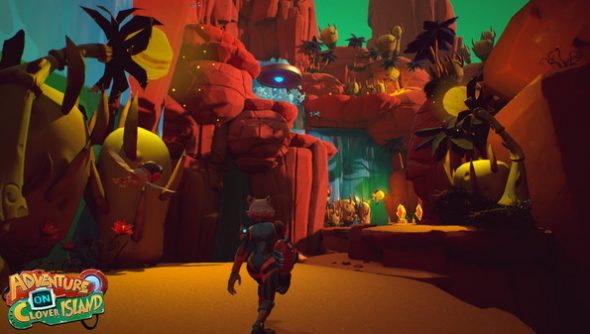 Many think Yooka-Laylee’s imminent release will signal a resurgence of 3D platformers. The fact is, though, that resurgence is already kinda happening. Not only are big console players like Sony releasing remasters and remakes of PlayStation platforming classics, but the indie scene is starting to explore the forgotten genre.

I mean, technically it’s not indie, but Ubisoft’s Grow Home and Grow Up were already there. Then there are proper indie games such as Unbox. This latest falls in the latter category, coming from small studio with a great name, Right Nice Games.

Skylar & Plux isn’t looking to break genre conventions, by the looks of things. It’s all anthropomorphic animals who work in a symbiotic duo bounding across lush, colourful worlds. It wants to tickle that nostalgia gland until you’re in a sentimental stupor. It probably has an ice level.

“Go on an action-packed adventure, collect gadgets helping you explore a beautiful paradise and save it from destruction,” says the official blurb. “It’s up to Skylar Lynxe, our nimble and courageous heroine, and Plux Owlsley, the trusty sidekick, to prevent the villainous CRT from conquering their newfound home and turning it into a wasteland.”

You can put it in your Steam Wishlist now, and the game will be on sale for $14.99 when it launches on May 19.