No, I don’t know which mod caused it. If I did, I could just uninstall that mod, take one walk around Windhelm to confirm that all the male soldiers had bothered to get dressed that morning and get on with my life, couldn’t I?

But it’s not even as simple as determining the mod at fault (if ‘fault’ is the right word – no judgement here). Modding Skyrim is like building a house of cards, except the cards are called things like ‘Immersive This’ or ‘Yeelathar’s 4K That’. Get the order of the mods even slightly wrong, and they overwrite each other in quite profound ways. It might be that whichever mod has compelled roughly 10% of Skyrim’s men to go about in the buff, their anatomically correct wangs keeping silent vigil over the land, would be working absolutely fine if it was loaded before a certain other mod, but after another one still. So I just have to live with it.

Of course, I knew there’d be at least a danger of this when I uninstalled a male skin replacer mod. This would make the men of Skyrim have willies, and I signed up for that. I just didn’t expect them to be so… commonplace.

Let me go back a bit though. When you get back into Skyrim after a break you can go about it in two ways: one, trawling the Nexus page by page for mods you like the look of and downloading them individually, or two, finding a great big list of recommended mods posted in a YouTube video description and just blindly installing them all in one concentrated marathon effort. 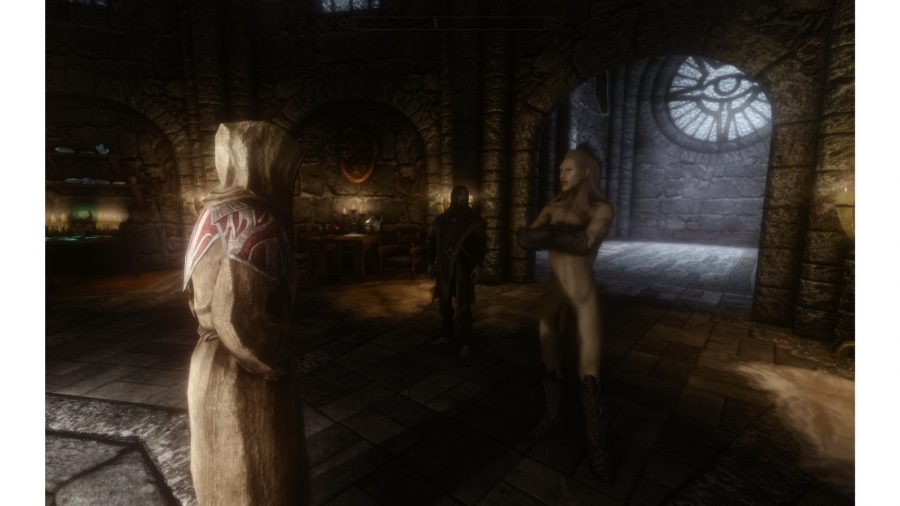 So it was that my Skyrim SE came to be modded by 230 separate .esms. So it was that I willingly invited male and female reskins with uncensored anatomy into my game. And, as I think I’ve mentioned already, so it was that around one in ten men – only the men – now walks around naked.

It isn’t that there’s anything inherently wrong with the nude male form, of course, nor with admiring it. I want to be really clear about that. Skyrim has been, can be, and probably is being even as you read this, used as a medium for all kinds of sexual exploration, and as long as the NPCs involved all give their consent and aren’t in an emotionally vulnerable place, that’s fine. 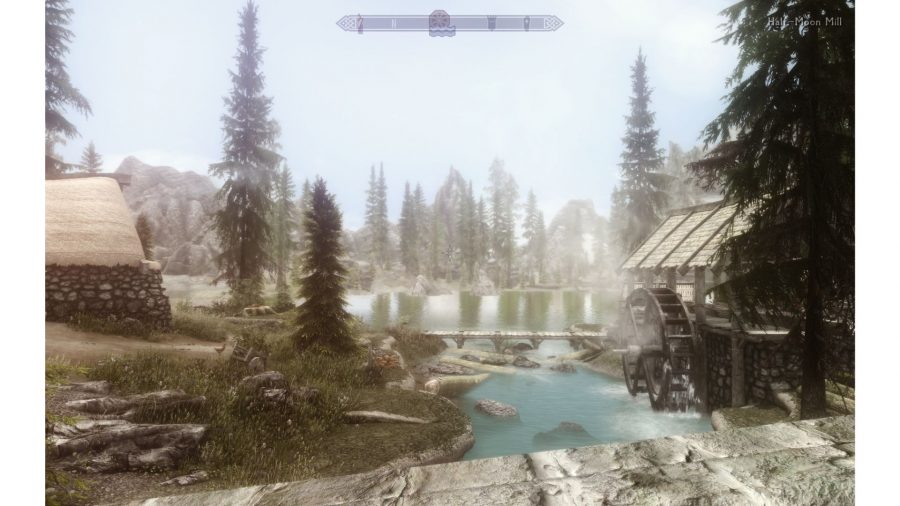 But my Skyrim’s always been quite an asexual place. It’s somewhere I go for long walks, or to visit my numerous player homes and reminisce while looking through display cabinets of quaint low-level gear. It’s my domain – all the more so for the modding efforts I’ve put into it over the years. Over the hundreds of hours we put into the game we develop a very personal sense of what’s canon. What’s lore, in our save. And that’s the thing: these willies, appearing so incongruously in otherwise everyday scenes all over Skyrim, are not lore.

Urag gro-Shub. Librarian of the College of Winterhold. Academic of renown. Why would he be sitting naked in his library?

Case in point: Urag gro-Shub. The librarian of the College of Winterhold. An academic of considerable renown, famed for collecting at least one copy of every book in Skyrim. Now, why the fuck would he be naked when I stumble into his library? Sitting there, all relaxed at his cosy desk, telling me about some missing books that a rogue mage did a bunk with, completely nude and completely unphased by it. It just breaks immersion, doesn’t it?

And if it broke immersion when I first visited him in the library and had an awkward conversation with him as he sat by the fire, it basically stuffed immersion into a big phallic cannon and shot it out into the stars when I had to follow him up several sets of spiral staircases. 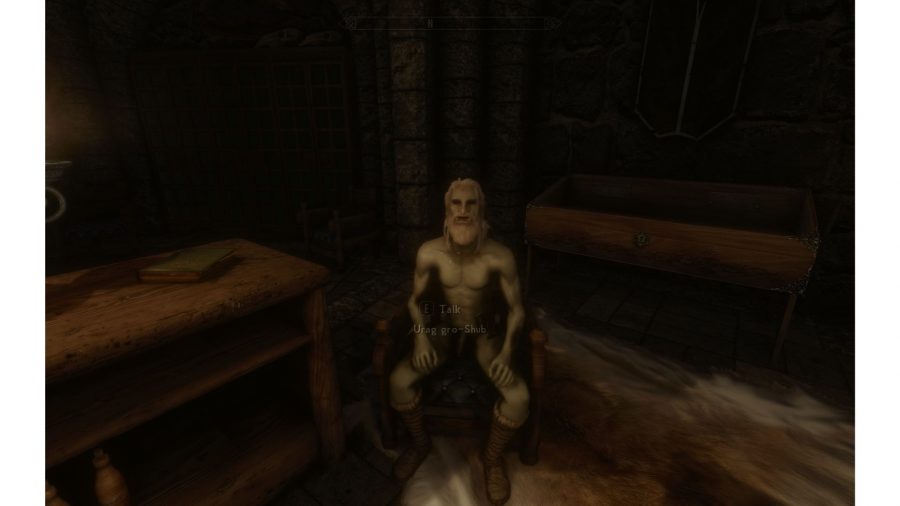 Still, without the appetite for tinkering with an already precarious load order for fear of causing even more disastrous glitches, I’m trying to explain away this out-of-context nudity as lore.

Perhaps it’s a political statement. An anti-war message, shared by a small but devout group of pacifists who believe we should put down our armour and address each other as human beings (or orcs, or elves, or argonians, or khajiit) in the starkest terms possible.

What load errors will you incur? Check out the best Skyrim mods

Perhaps they’re demonstrating dissidence against the Empire by refusing to wear its regalia. Perhaps they’re just hot. There are a lot of really big fire pits in some quite small indoor spaces in Skyrim, when you think about it.

The one I arrive at most often though is that these naked blokes are all members of a secret order so deadly and highly trained that it’s basically unethical for them to wear any armour or clothing of any kind. By going about their business in the nude, they at least give others a fighting chance if combat were to break out. Yes. Yes, I rather like that. The Unarmoured, they’re called. A secret society of double-hard bastards so clandestine that not even Urag gro-Shub’s library contains a single mention of them. Then again, Urag himself has a vested interest in keeping that secret. 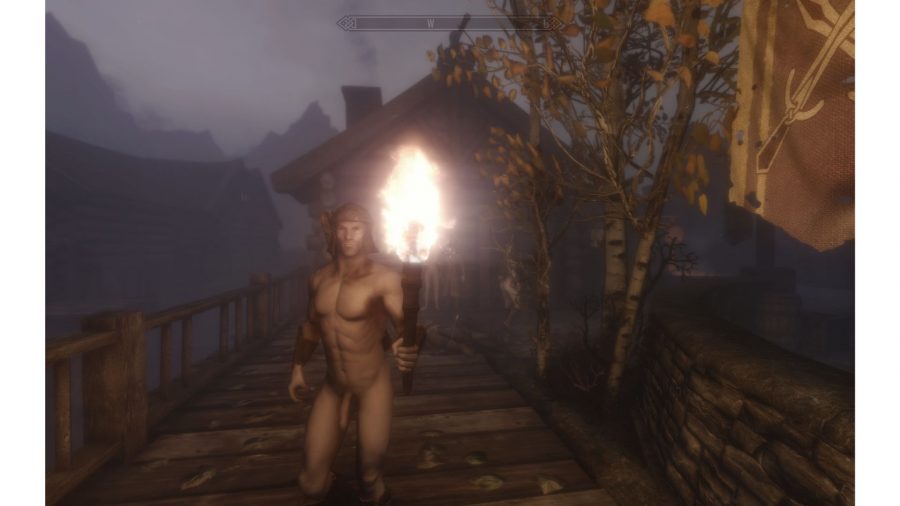 But seriously, if anyone does know how to fix it, let me know.