If you or any tiny humans that you own play Minecraft or Trove, then you’ll probably feel right at home in SkySaga. It’s another blocky, voxel-based sandbox where one minute you’re fighting monsters with your newly-crafted sword, and the next you’re adding the finishing touches to a charming rustic cabin or an intimidating medieval tower.

If you’ve got the sandbox itch, why not take a look at our list of the best sandboxes on PC?

The similarities between Radiant Worlds’ alpha MMO and other cubist sandboxes are many – it’s almost become a genre – but SkySaga is not content to play the part of a clone. Tweaks to the formula are abundant, and it’s blessed with a distinct art style that makes it significantly prettier than its ugly contemporaries. 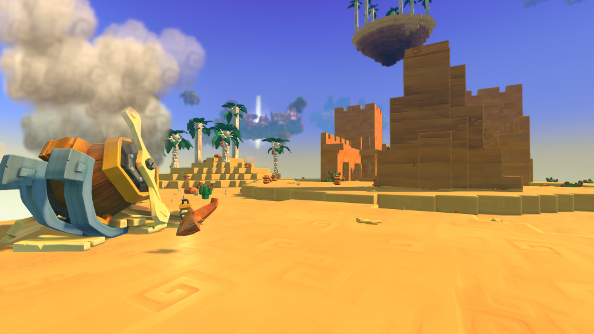 Where Minecraft is retro and Trove is more like a blocky cartoon, SkySaga is almost Mesoamerican mixed with traditional fantasy. It’s an unusual combination, where Mayan art and Saturday morning cartoons collide.

So the aesthetic is more advanced, but this is still a game about building, crafting and going on bite-sized adventures. It’s simple and cute, maybe not enough to keep most adults gripped for more than a few hours, but certainly the sort of thing that will swallow up a kid or YouTuber’s time.

Simple does not mean shallow, however. There’s some depth to SkySaga, and some handy features to make that depth manageable. Take the Chronicle, for instance: it’s a convenient tome filled with personal objectives and recipes that you’ve uncovered on your adventures, detailing exactly what you need to make a new tool, weapon or device, while also revealing how various resources can be used. 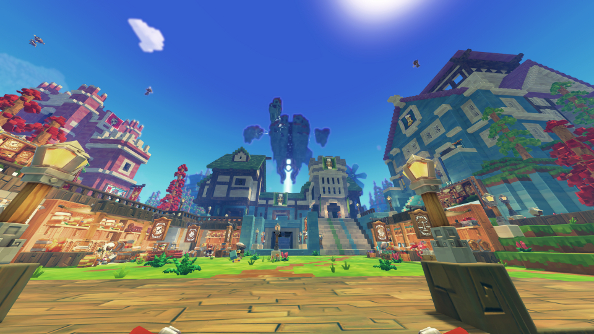 If poring over books and recipes doesn’t sound like your idea of a whimsical adventure, then the effectively infinite number of fleeting, random adventure islands might be more your speed. While SkySaga gives you a tiny airship so you can fast travel between your wee floating island and the main hub, to get to these adventure islands you’ll have to open up a portal. These magical gateways can be activated with keystones that must be crafted in a special device found in the portal chamber. The type of keystone determines the biome and difficulty of the island, opening up a rather flashy doorway between words when used.

Each one of these temporary zones is fat with biome-specific beasties and resources, and more importantly contain a dungeon and accompanying boss, which must be defeated if you want to ‘complete’ the zone. You’ll get an oversized chest full of loot if you do, and it may be that you have a quest directing you to beat an island, netting you even more rewards.

Quests are… well let’s just say they’re not going to knock any found in The Witcher 3 off their pedestal any time soon. In fact, ‘quests’ might be too strong a word – they are just very simple objectives like kill a certain amount of monsters or collect a specific amount of a particular resource. It’s all stuff you’ll already be doing, but picking up these quests gets you extra experience and loot. There’s an attempt to cater to different playstyles as well, since the hub area contains a variety of guilds that will task you with fulfilling objectives related to the guild’s theme, like exploration or architecture. 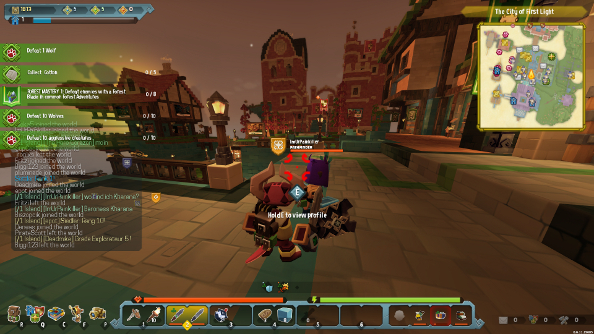 SkySaga is still in alpha at the moment, and while it actually feels quite polished in many respects, there are a couple of niggles that will hopefully be ironed out as it gets closer to launch.

The most problematic issue I encountered was the first-person view. Like Minecraft, this is the default perspective and probably the best one for building, but a mix of UI clutter, iffy hit detection and the fact that you’re playing a very stumpy character made the experience feel claustrophobic and awkward, even with the FOV slider pushed up to the maximum setting. Thankfully, there’s a third-person mode, and switching to that solved a lot of these problems.

If any of this floats your airship, you can register an account here. Radiant Worlds have been sending out invites in weekly batches, so hopefully you won’t need to wait too long to start leaping through portals.