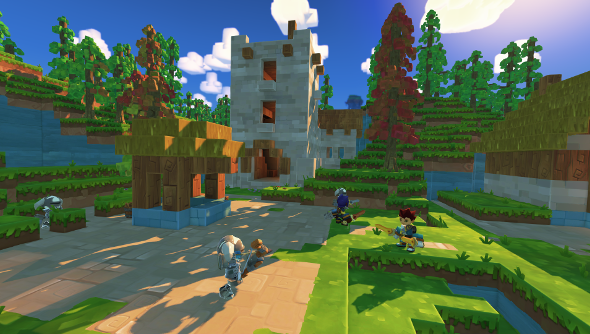 Radiant Worlds, the studio that rose like a phoenix from the ashes of Blitz Games, have just announced SkySaga: Infinite Isles, a disgustingly colourful, voxel-based and procedurally generated adventure game. It’s… well, it looks a whole lot like Minecraft, obviously. I don’t think we can continue having a grown up conversation about SkySaga until we address that particularly blocky elephant in the room.

But wait, don’t go! Here’s a bunch of unique things SkySaga is doing that make it a little less like Minecraft, and a little more like a cool thing worth being interested in.

You can go on procedurally generated adventures. That’s sort of the point of SkySaga. Everybody gets a permanent home island that they can customise and build on, creating huge castles and dungeons and lairs and things, all in a bunch of different themes. From these home islands you can open portals to one of the game’s titular infinite isles, procedurally generated landscapes that contain within them an entire adventure that’s been designed by a clever and dutiful adventure designing algorithm. 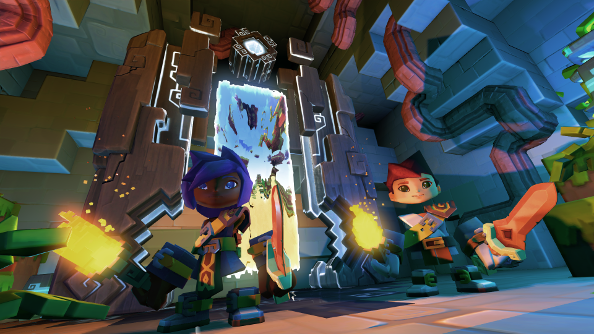 These islands each hold about half an hour’s worth of adventuring, with paths that gently guide you through castles and caves and towns and onwards to rare treasures. This central quest can be ignored if you’d rather just explore the wilderness however, meaning you can wander off and discover what else the map has to offer. The adventure generator plonks down all sorts of interesting features across the map: modular castles with unique layouts for example, as well as things like dungeons and coastal watchtowers. Radiant Worlds call it an “anecdote engine”.

As you might expect, on your adventures you’ll find weapons and armour, you’ll level up with experience points, you’ll find items to customise your home island with. There’s a crafting system, and you can raid treasure chests to find new recipes to craft better items. There’s also PvP and co-op, meaning you can pootle about these adventure islands with your friends or hunt down other adventurers who’ve stumbled into the same procedurally generated island. Combat is more complex than you might imagine too, with dual wielding and combos lending SkySaga a bit of tactical depth. 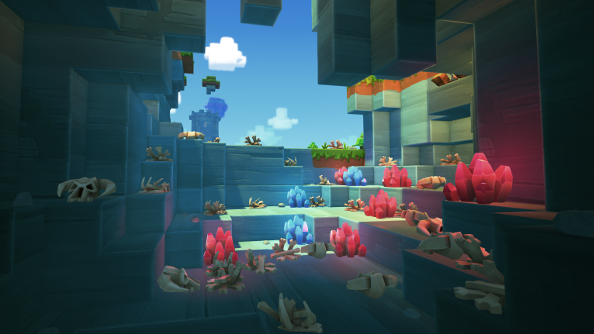 For a game that’s only just about to enter its open alpha stage it looks remarkably complete already, and visually luscious throughout. The brief demo we were given showed off an impressive little pastel world, with rolling landscapes often thrown into shadow by vast islands floating overhead. Immense charm has been infused into the animation of its consistently chunky block-characters, from the twee little bouncing sheep to the marauding enemy knights. SkySaga may have swiped Minecraft’s look, but it’s drenched it in an adorable cartoon style.

Trading will play a large part here too, with players able to throw open their home island as a sort of marketplace for other adventurers to visit. Heading out on adventures to retrieve valuable items, before returning home to sell them on at inflated prices, can become a viable in-game career. Similarly, farming is suggested as a pursuit, with plants and animal breeding all planned for inclusion.

SkySaga: Infinite Isles is still heavily under development, its features still wispy promises on the breeze. It will be free to play when it arrives, with some vague ideas of monetisation on the horizon, but Radiant Worlds’ first priority is selling players on the idea of embedding questing structure into the blocky sandbox genre. Because that’s where it differs most from the game that inspired it.

That, and the fact that SkySaga backed by an immensely wealthy free to play publisher in Korea, which is keen to ensure that the game it’s funding has all the global appeal of dopamine.