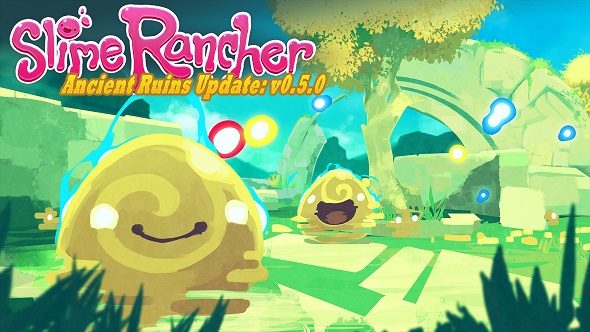 In the latest content update for Slime Rancher, developer Monomi Park have added a brand new area to explore and a new slime to catch. This new slime can project images of themselves through different realities, acting as quite the nuisance for budding slime herders.

If you’re one for exploration, check out these other PC sandbox games.

Located between the Moss Blanket and Indigo Quarry, the Ancient Ruins is an area of twisting corridors and collapsing buildings which is unlike most areas seen in the ultra cute slime wrangling sim. The Ancient Ruins act as the home for the new quantum slime, a ball of goop that can seemingly appear in two places at once, emitting other possible realities of itself when it becomes agitated. One will always be present in our reality, so aim your slime vacuum at that one to catch the slippery blighter. If they are getting too hard to track, just feed them a phase lemon and they should calm right down.

When housed back at the ranch, quantum slimes look like they are escaping from containment, when it’s actually just them jumping between realities. As long as you have a sturdy containment field to put them in, you should have no outbreaks.

As well as quantum slimes, the Ancient Ruins lays host to a new collectible called an Echo. This motes of light can be found dotted around the ruins and can be used as a decoration back at the ranch. Simply stick them to buildings or walls and you can create some luminous art to brighten up the homestead.

Along with new achievements, treasure pods and deco gadgets, this update comes with a whole host of bug fixes and balance adjustments which can be found on the Slime Rancher Steam page. For those who are interested in a life of raising cute blobs of jelly, Slime Rancher is currently available on Steam Early Access for $19.99/£14.99.