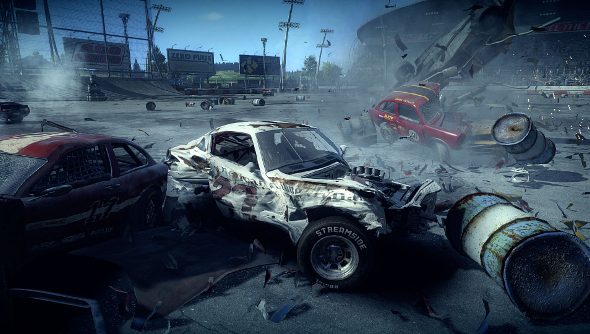 Since cars are essentially metal coffins on wheels, I don’t drive. But people have explained to me that it’s a fairly popular pursuit, and that sometimes folk even race these speeding death traps and even crash them into each other for kicks. Maybe everyone would be safer if these people just played Next Car Game, a demolition derby themed racer that’s conveniently just hit Early Access.

It’s only available through developer Bugbear’s website, but you’ll be able to download it on Steam and you’ll get some extra goodies for chipping in early like a special supporters car and your name in the game.

This Early Access version comes with two cars and three tracks, showing off both the racing and demolition derby shenanigans with 24 cars competing. Bugbear warns that Next Car Game is missing a lot of features, isn’t very stable and “It probably doesn’t run any better than any old junk car bought off the street.” So don’t say you haven’t been warned.

To celebrate its move to Early Access and the season of giving, Bugbear is also running a competition where you can win a bundle on Steam containing FlatOut, FlatOut2, FlatOut: Ultimate Carnage and Ridge Racer Unbound. If you preorder Next Car Game or sign up to their newsletter, you’ll be entered into the competition, which is rather nice.