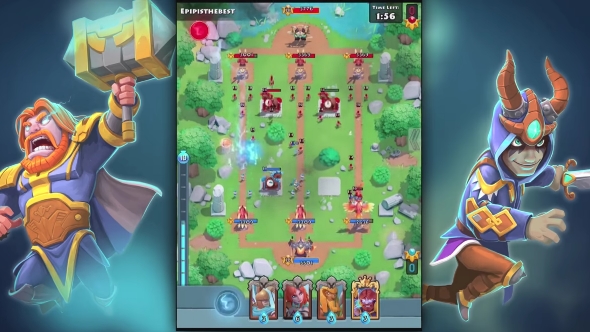 Work on Smite Rivals, a planned card battle game based on the free-to-play MOBA Smite, has been suspended.

Never mind, plenty more cards in the deck. Check out the best card games on PC.

The news comes via Kotaku, who say they were contacted by “a source close to the game’s development”. This source says “the unnamed third-party studio” who had been working on Smite Rivals were taken off the project on Wednesday morning. Kotaku followed up with publishers Hi-Rez studios, who confirmed the announcement with the following statement:

“We made a decision this week to put Smite Rivals on hold. While we are still excited by the general concept of Smite Rivals, it was clear after early testing that the game needed significant additional development before releasing. With Smite Tactics, our turn-based strategy game set in the Smite Universe, performing well, we have decided to focus our energies on that for the time being.”

Smite Rivals was announced, and was playable, at the Hi-Rez Expo back in January, where Matt had time for a quick hands-on. You would have built up a deck of cards featuring creatures from Smite, and played them on a three-lane battlefield against an opponent. Cross-play functionality between PC and mobile was also planned.

Two months is an oddly quick turnaround from announcement to suspension, especially with a playable build finished. This suggests “significant” is the right word for the extra work Hi-Rez felt was necessary, or perhaps they weren’t seeing the interest they’d been hoping for.