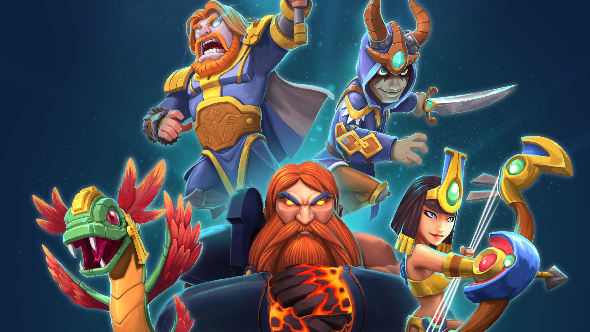 Announced at Hi-Rez Expo 2017 was Smite Rivals, a new experiment that combines PC and mobile devices. It’s billed as a Collectable Card Arena, but what that means in non-buzzword speak is something that feels like the skeleton of a MOBA, played 1v1, with a deck of cards. Oh, and it’s in real time. Forget making ponderous, careful decisions: Smite Rivals requires you to throw down cards like they’re machine gun bullets.

Like your card games a little more traditional? Check out our favourite CCGs on PC.

The playable build at Hi-Rez Expo is demoed on huge iPad Pros, but the game will be available on PC through a client. The idea is that you can play on PC and continue right where you left off on your phone or tablet while on the move. From that you can probably already foresee the kind of match times we’re talking: quick ones.

Smite Rivals has more in common with the core game than you may expect, especially after the closed beta launch of the more Hearthstone-like Smite Tactics. As in a MOBA there are three lanes, each crowned with a tower, which defend the Titan in your home base. Minion creeps march down said lanes, and the idea is to break through the turrets in order to defeat the enemy Titan. You do this by deploying cards, which turn into characters in-lane and automatically march towards the enemy.

As with Tactics, card decks are made up of a variety of gods, monsters, and spells. Thor strides forward swinging his hammer in deadly arcs, while a Manticore can shoot fire breath into adjacent lanes. Health erodes quickly; your character likely won’t make it to the end of a lane on their lonesome, so throwing numerous units at a single lane often feels like the only way to destroy its turret and open the gate to the enemy Titan.

Of course, there are limits on what you can do. Cards, as in other CCGs, are paid for in mana, which is a constantly regenerating resource in this real-time environment. It gives the game a different dynamic. Do you wait to collect enough mana to play a more powerful card – and thus leave a lane unpopulated – or throw out numerous low-cost cards that will act as a meatshield for your turrets, but likely do little to damage the enemy?

Show floors are not the greatest places to be introduced to a brand new game, but after just one match I’d got the hang of how Rivals worked. I realised that ranged units can defend both the lane they are in and the one running parallel, and that defences can be bolstered by playing cards that build turrets in the ‘jungle’ area between lanes. There’s a card that summons a lightning storm, but it takes a few seconds to summon, so you need to target it a little lower down the lane in order for it to strike where the enemy will be. 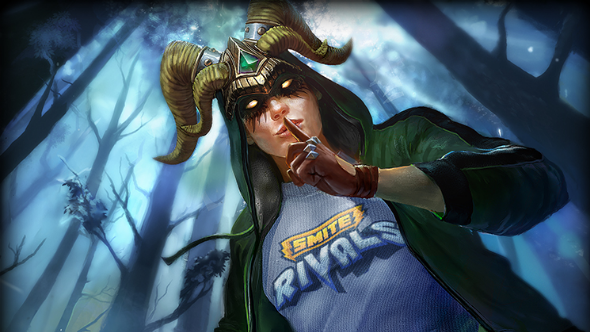 My first match against one of the development team was a humiliating defeat. My second, third, and fourth were hard-fought draws. For every character they sent marching down the lane, I deployed something that I discovered could counter or overwhelm them. While it was difficult to inflict any lasting damage (only in one match did I manage to reduce a tower to rubble and march on the Titan), I quickly learnt how to not lose. And that’s testament to how intuitive Rivals is, despite being an unfamiliar design.

Part of me wonders how much longevity Rivals can have; not many big studio attempts at mobile gaming stays in the memory long. For all the pandemonium over Pokemon Go, it sort of feels like last summer’s novelty now. Plus there’s the fact this is a simple, touch-control designed game that’s on PC. Is that enough for the incredibly demanding PC crowd? But there’s certainly shades of Plants vs Zombies to Smite Rivals’ almost tower defence mechanics, and PopCap had incredible success there. Using the lore that Smite die-hards love, and allowing them to continue playing without the need to lug a gaming laptop on the bus, perhaps Rivals is well placed to carve its own little niche.