“We always joke that if we were putting this game out there now, it might end up being a sports game by the end of the year,” laughs Scott Zier, creative director at Hi-Rez Studios. His team is working on Smite Tactics; a turn-based spin-off of their massively popular MOBA. Despite having only been in development for four months, it’s changed hugely over its lifetime.

“It started off as a god squad,” explains lead designer Scott Lussier. “You’d pick five gods and you’d be on a big map, just moving around against each other with no RNG at all. It was more like chess. Over time it just adapted.”

These days Smite Tactics is a card game with a healthy dose of influence from Hearthstone. Mana builds turn by turn, damaging blows are traded with each attack, and the cards themselves are doppelgangers for Blizzard’s. But, in typical Hi-Rez fashion, the game doesn’t wholly adhere to genre conventions. Each card in your deck is represented by a 3D animated avatar, controlled XCOM-style on a grid-based board. By introducing positioning and movement, Smite Tactics makes for a rather different CCG experience. 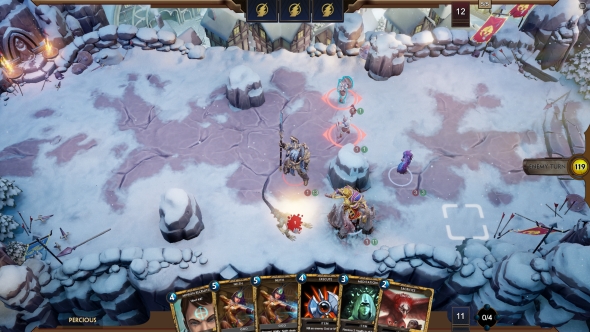 A game of Tactics is fought between two players each equipped with 20 cards. Decks are themed after the Pantheons of gods as seen in the Smite MOBA, and for my hands-on we pit the Norse lords against Greek deities. The Norse cards are focussed on physical aggression, while Greek leans more towards mysticism.

Each deck is captained by the Pantheon’s leader, so as Norse my main champion is Odin. Akin to Hearthstone’s characters, these leaders have defence and attack ratings, as well as a special ability (Odin can grant an ally +1 attack damage for one turn, for example). To win I just need to smash my opponent’s leader, beardy lightning-hurler Zeus, into the dirt.

In Hearthstone attacking the enemy is easy: they’re always at the top-center of the board. The more physical side of Smite Tactics makes this a far more difficult task. Your leader, along with any character cards you play, are placed on the squared battlefield, and can move around each turn. This means that as well as using minion creatures as a buffer to keep your leader safe, you can also keep them far out of reach of the enemy’s weapons. 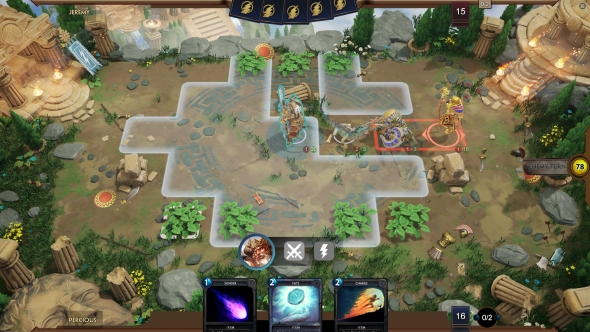 Positioning and ranges become a huge part of every battle. While Zeus is capable of shooting his lightning bolts over distance, Odin needs to be close to deal damage. I don’t want him to get him beat up though, so I pick a card from my hand: Odin’s faithful son, Thor.

Cards come in a variety of flavours, but the most notable ones produce gods. Thor may not be powerful enough to have his own deck, but he’s certainly a beefy unit you can field as a Norse. Like all gods, Thor has an active ability, which in his case allows him to increase his attack damage by +1 for every adjacent enemy. It means he can be devastating in a scrap, and also emphasises how integral positioning is to the game.

Thor doesn’t make it into the fight, though. The Greeks have a variety of great god cards on their side, one of which is the snake-haired Medusa and her petrifying stare. My hammer-swinging Viking is permanently turned into a stony statue before I can move him close enough to cause any damage. 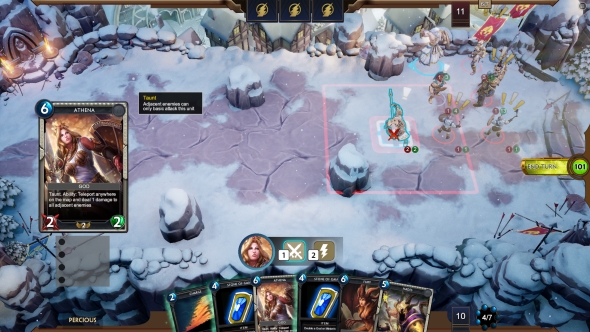 The interplay between abilities has created an astonishingly delicate balancing act for Hi-Rez. “Since we have movement in our game, it’s like ‘Ok, if I reduce his movement by one, what is that gonna do? Is he still worth a five cost, or should he be lower because of this?’” says Lussier. “And the same thing with abilities. So for Anubis, who deals three damage to three enemies and it pulses for another round, what do we cost that at?”

Such a challenge has led to Hi-Rez getting the game into players’ hands exceptionally early; a closed alpha test has already launched. It’s the only way for them to get the feedback that’s imperative to making sure every card in a deck is fair and balanced.

Gods may be the all-powerful cards with specialist active abilities, but Tactics’ minion cards are equally fun and imperative. With lower mana costs they fuel the opening turns of battle, and each have their own tricks. The Basilisk – a neutral card that can be used by any Pantheon – may not be able to turn an enemy to stone with its stare like Medusa, but it can root an enemy to the spot for a turn. The Greek Brute has Taunt, which forces adjacent enemies to attack it first before being able to target anything else. Both take ranges into account, which demonstrates how Smite adds new complexity to previously established ideas. 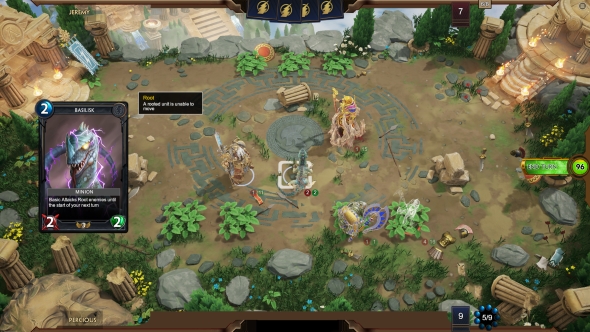 The addition of movement has made the actual playing board more important than in regular card games. Smite Tactics’ boards are battlegrounds themed after the cultures showcased in its Pantheons, be that the sandy plains of ancient Egypt or the blizzards of Norse Scandinavia. Each one presents a slightly different arena. The Greek map, for instance, is dotted with bushes that units can hide in. While there, their outline can be seen by the enemy, but they cannot be targeted. It’s a very safe space to spawn characters, especially if they have to wait a turn to activate.

A little more traditional than the battlegrounds and moving units is Smite Tactics’ deckbuilder. At current the selection of cards is slim and only Odin, Zeus, and Ra’s Pantheons are available, but the classic ‘two of those, one of that’ picking process is in place. Your deck is made of cards from your chosen Pantheon and a selection of neutral ones.

“Two weeks ago that was different,” says Zier, proving how fast Tactics is evolving. “We used to have it that you could build from any two Pantheons. So you’d cross build. It had a little more of a Magic flavour in that sense, but we went back and forth a few times and now lean towards this way. It’s the strong theming that resonates better.” 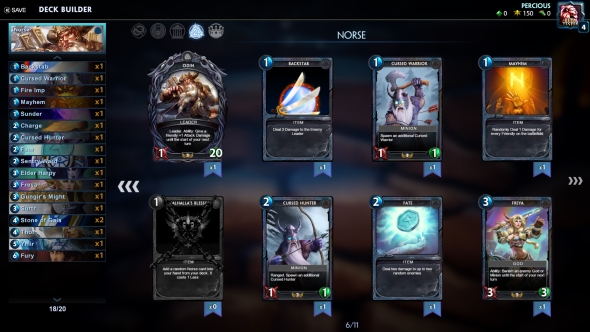 As you flick through the cards in the deck builder, the flavour of each Pantheon becomes obvious. With cards that can spawn two minions, Norse is clearly an aggressive, board dominating deck. The Egyptian deck, on the other hand, has no minions at all, mixing gods with a variety of spell cards that will demand a more targeted approach.

From afar, Smite Tactics seems like an odd and risky idea. Completely detached from the things that attract people to Smite – fast action, reactive decision making, all that MOBA jazz – it’s almost certainly not a guaranteed hit for their current fans. But just look at one of its key influences. Hearthstone shares nothing in common with Warcraft, yet is one of the planet’s biggest obsessions. With an example like that to follow, it’s understandable why Hi-Rez would feel happy taking the plunge.

But more than being ‘that Smite thing that’s sorta like Hearthstone’, Tactics will likely find its community in those looking for a CCG that’s more than just throwing cards on a table. The tactical movement is a welcome addition, and for many it may just add the level of visual sparkle required to make a pedestrian game of cards something quite exciting.