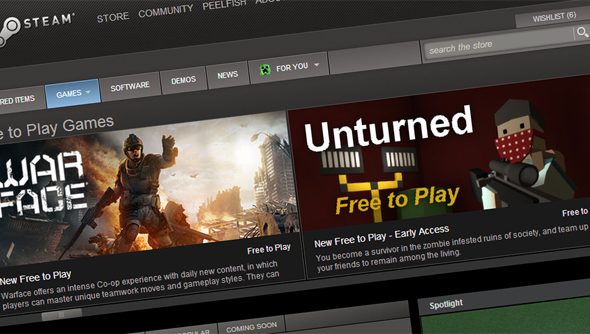 Smite seems destined for years of prosperity. A simpler, third-person take on the MOBA, it’s backed by Riot Games owners Tencent, $600,000 in Smite World Championship prize money, and the plaudits of our Fraser in his Smite review.

But it’s not on Steam. According to developers Hi-Rez, that’s because it’s harder to promote a game on Valve’s storefront if it’s free-to-play.

Hi-Rez’s history as developers of Global Agenda and Tribes: Ascend means they already have a “large base” of players sold on the idea of free-to-play hardcore games, Hi-Rez COO Todd Harris told PCGamesN at GamesCom.

“That helps with the discovery problem,” said Harris. “Having the existing community.”

With access to that community, Hi-Rez are confident in their ability to bring in new Smite players by themselves. They’re less confident in Steam’s ability to promote free-to-play games.

The reason’s simple enough: free games can’t be discounted, and therefore have fewer occasions on which they can grace the Steam front page.

“Steam is a great platform and can help with discovery,” said Harris. “It’s a little harder for them to work with [a free-to-play game] developer to give it good promotion.”

Harris thinks Valve are even now thinking up solutions – but for Smite, Hi-Rez didn’t want the “added challenge” of working out how to boost the game’s profile on Steam. Hence its absence.

“I would never rule out going on Steam for now, but at this point the game is growing without it,” said Harris. “It really comes down to that.

“There’s definitely MOBA players on there. I think given time they can all discover the title.”

It’s an odd problem, given that two of Steam’s most prominent free-to-play games are Valve’s own. Valve tend to reserve a space on the front page carousel for TF2 or Dota when there’s a big update – but could they be doing better?