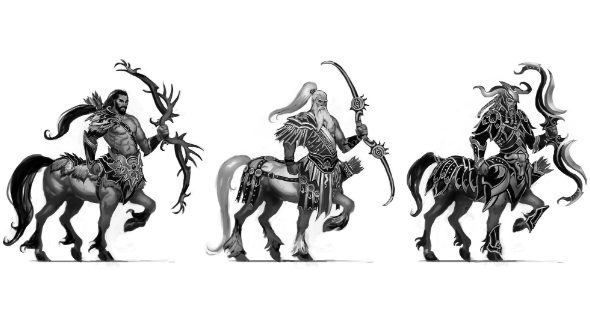 Last week, amidst the hustle and bustle of releasing a closed beta for new game Paladins and hosting the regional finals of North America and Europe’s Smite seasons in their Atlanta office, Hi-Rez Studios saw fit to unleash a new god upon the latter’s game world. Chiron, the legendary teacher of Greek heroes, set hoof on the battleground, bringing an odyssey of design, testing and refinement to an end.

Smite’s perpetual mission to bring every deity from all beliefs to the party is also set to continue with the introduction of a new pantheon next year made up of Japanese religions.

“Obviously we’re a game about mythology, so one of the things we look for is a mythological character that would be good to bring into the game,” lead designer Scott Zier tells us, in between the muffled roars of players in the next room, competing for their spot at January’s Smite World Championships. “And there’s a lot of qualities that a good choice has.”

Those included so far have ranged from the classical ancient pantheons of Greece, Rome and Scandinavia, to Latin America’s Mayan culture and the still-practiced religion of Hinduism. For the latter, it can become something of an ethical minefield to ensure a god’s inclusion isn’t disrespectful to their modern day followers. For example, the avatar of destruction, Kali, is much more amenable to roaming the jungles and lanes of Smite than the widely-revered god of wisdom and knowledge, Ganesha.

“We’re a fun, little bit tongue-in-cheek game – we don’t always very strictly adhere to the mythology, we tend to have a little bit of fun with it at times,” Zier says. “So we have characters like Apollo, who even though he’s a Greek god has a kind of British rockstar accent, things along that line. We try to have fun with the mythology but still stay true enough that the basics that are set out are still part of the character.”

The latest addition to the roster, Chiron, a wise and noble centaur, made his way to the top of what Scott says is a long list of ideal candidates. Responsible for the teaching of Achilles, Theseus and Perseus, Chiron was both well-known and created an interesting opportunity for characterisation.

“Chiron’s actually a fun one because we’ve wanted to do him for probably like a year or a year and a half,” Zier explains. “But there’s been several things that held us back. One was that we were pretty heavy in that pantheon already so we were waiting for a good opportunity to bring him in. The other was that centaurs are hard.

“Whenever you’re doing multi-legged movement on a horse, and horses don’t particularly strafe well in the real world, there’s a lot of challenges in making that look good so we knew we were going to need a little bit extra time to get that polished into a really great state.”

The beginning of this process was to attempt to create a workable animation rig, or mesh, by using the horse that Chinese warrior Guan Yu summons during his ultimate. Once it began to look a bit more real instead of the accidental glitching together of two human skeletons inside a horse model, like some sort of pantomime monstrosity, the real design process took over. 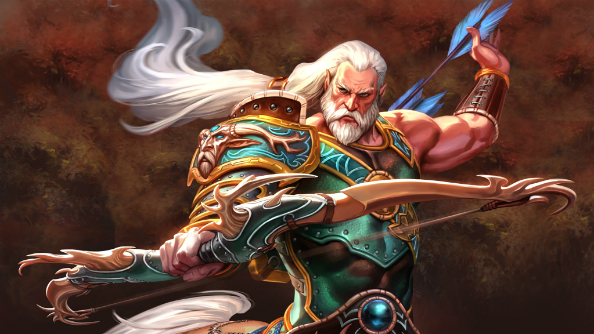 “We actually do cross-departmental meetings, which are basically idea meetings where we throw out any idea that might be great for a new god,” Zier says. “Anyone who wants to attend can come to it, and any idea that’s good we just write down. Obviously we can’t use every idea, so we tend to end up with a big long list of really cool ideas that we haven’t done yet, and then those are the things we tend to go back through with other characters.”

Some of these ideas which got tossed aside for other gods happened to fit well with the lore and proposed role of Chiron. The creation of a god, including their final model design and abilities, or kit, is the conclusion of a double-barreled pipeline with multiple feedback loops. Researchers find lore to suggest a direction, and designers come up with mechanics that will improve the game that need to be justified thematically by researchers and artists. Chiron’s design process was no different, and incorporated ideas from previous meetings.

“It wasn’t specifically around being a centaur, but we’ve wanted to do before an ultimate ability where you could still use it even if you were dead and had an opportunity to come back to life,” Zier says. “There’s a sort of clutch moment excitement that happens with that. And generally, when you put in an ultimate that’s hard to do but when when it’s pulled off, then it makes you feel like jumping up and cheering, that’s always exciting to do from a design standpoint.

“And we’re able to loosely tie the lore into that, so when he goes into his ultimate he becomes the constellation for Chiron, which has this element of him living on forever, and you can sort of see it inside his mesh.”

The rest of Chiron’s kit positions him in a strange place. His role, a hunter, means he has ranged attacks that deal significant damage, but a lot of his abilities have a more support-oriented feel to them. All the while, making sure that the animations, mechanics and overall theme of the abilities lock into everything about the character in traditional texts, too. 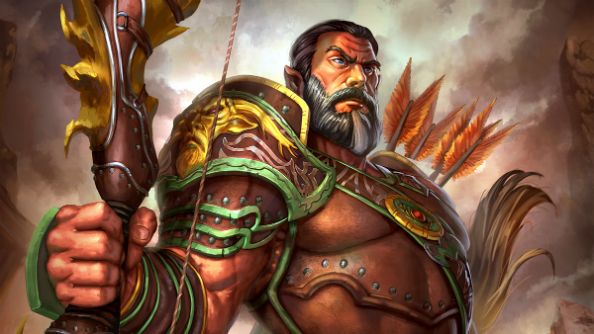 “We wanted him to be able to gallop, and do something that felt horse-like, so we ended up with him being able to buck people behind him if he charges through people. It added a fun new gameplay element for him but also feels like it fits naturally,” Zier says. “And we experimented with a lot of different versions, ending up with something very simple, allowing him to shoot while he was galloping. Just because there’s this mythos of horse archers, when you look at them the idea is that they have mobility while also being able to shoot.”

But Chiron’s other abilities are focused on supporting teammates, with an AOE damage that also cleanses ally status effects and a passive healing effect on allies in range. Zier wanted this to fit in with the trainer aspect of Chiron’s lore, that he was there to help guide the other players’ characters once upon a time. This hybrid ADC-support role is a fairly new one to Smite, but it’s something that the team at Hi-Rez has been preparing for a while.

“Whenever we hybridise someone they get something while losing something somewhere else, so he doesn’t really have any direct stims for his attack speed, which for a lot of hunters is a very important part of their kit,” Zier says. “He has other limitations that make him more ability focused and ability based, it’s similar to when we do a warrior but we kind of intend them to play a bit more like an assassin. So we have this idea that we hybridise assassin warriors like Osiris, so it was kind of the same way but giving him support capabilities, so we thought there were other things he shouldn’t have in his kit as well.”

With Chiron now in the hands of players on PC, and on Xbox with the next patch sometime before January and Smite World Championships, attention turns to the game’s next chapter. The addition of a new pantheon is very similar to deciding on a new god, but with the added factor of audience involvement.

“We did do a broad look at what all the different pantheons we could add were, but I think we went with Japan because it was by far the most requested among our playerbase, and that has a big impact on us,” Zier says. “When our players really want something we want to be able to deliver that for them.”

The team currently has three gods from the Shinto religion in the pipeline, with the first ready for a big reveal at SWC in January. You can catch a very brief sneak peek of the god’s concept design at the end of the latest developer update, although a fairly standard samurai affair is unlikely to give many large clues as to who is in store, and according to Zier there are certainly going to be a few.

“We also wanted to get a pantheon that has a lot of depth to it, so we can build out a lot of characters over the course of the year” he says. “Some of the pantheons we were looking at, though really exciting, only had maybe two or three fun characters to do and it was starting to trail off a little. And we might come back to do those later on but we wanted another really big pantheon that we could sink our teeth into.”

So far, Zier has five gods from the Shinto religion planned out for this year, one for each of the major roles within Smite (so you can fill an entire team comp, supposedly). But after that, it’s open season again, as the team will begin looking at many of the other mythologies of Japan and revisiting old haunts again. There’s no shortage of inspiration, that’s for sure.