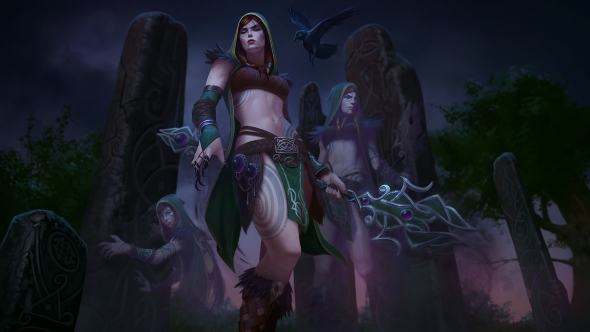 The Morrigan, Smite’s 84th god and first member of the new Celtic pantheon, is arguably the game’s most interesting god. Even if you disagree, there’s no denying she’s Smite’s most demanding character; in order to truly master her, you need to be proficient with the skills of every single one of Smite’s gods. The Morrigan was introduced to the world at Hi-Rez Expo, and while there I took some time to chat with executive producer Chris Larson about her abilities and how they’ll shake up both casual and professional play.

Looking to dominate lanes and towers? Play one of the greatest MOBAs on PC.

“We wanted to stretch out and do something totally different,” recalls Larson of the period when the Morrigan concept came together. “People have always said ‘I want a character who can steal another god’s abilities,’ and for three years we’ve been asking the lead programmer to do it. Every one until the current one has said ‘Forget it, we’re not doing it, it’s too risky.’”

The brave lead programmer in question is AJ Walker, and with his greenlight the shape-shifting Morrigan went into production in mid-2016. While elements were tweaked and refined over the months, the core design never changed: from the beginning she was a character that could become any other god present in the match.

Upon announcement, her incredibly powerful abilities immediately split opinion in the Smite community. “A lot of people are already screaming that she’s overpowered, but the thing with The Morrigan is she has an extremely high skill cap,” says Larson in defence of her design. “You basically have to know how to play every god in the match to really utilise her to the fullest.”

Shape-shifting into another god is The Morrigan’s ultimate ability, and at current she can only stay in a different form for ten seconds. Tapping ‘R’ opens a selector wheel from which you can choose any other god on the battlefield. This choice was a big design dilemma for the team.

“There’s always been debate,” says Larson. “Should you only be able to clone the enemy team, or should you only become the friendly team? Should you do both? We erred on the side of giving players the most choices.” 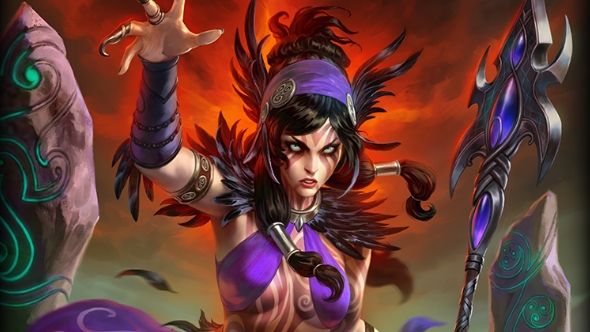 By allowing Morrigan to shape-shift into friend or foe, the game opens up various new and very different different tactics. “You can either pick your team around Morrigan so that you can do double ults, or you can counter-pick and negate something the enemy team has picked,” Larson explains.

I ask how she’ll fit into professional play. “So right now what I think will happen is: she’ll be banned every game!” laughs Larson. “If she gets by, the team will form a plan utilising her ultimate, like two Kukulkans or two Ares ults. They could have Morrigan turn into Ares and then pull everyone into a tower.”

Despite her ultimate being incredibly powerful, Larson is sure that The Morrigan isn’t an automatic victory. “She’s extremely complex to play in a competitive environment. You have to be really quick in your thought process,” he says. “If you haven’t ranked up a skill that’s important to the character you’re turning into, well you just wasted your ult and you’re stuck in it for ten seconds. We decided that one of the drawbacks of becoming another character is that you are stuck in that form for ten seconds, which can be a long time in Smite.”

The team saw it as important that The Morrigan could be used on the eSports scene. “70-75 of our 84 gods are viable in competitive play,” Larson notes. “You look at some other MOBAs and they just don’t allow certain characters to be played in competitive because they’re not fair. We don’t want that. We want every god to be something that the pros and the casuals can use.”

Larson also explains that the latter days of 2016 saw a focus on more casual-style gods because they knew that The Morrigan would drop in early 2017. “Nike is a strong and fun character to play, but relatively simple. We were doing that because we knew The Morrigan was coming and her skill cap is the highest ever that we’ve ever done.”

As with any MOBA, the latest god may be exciting for now, but there’s always something new on the horizon. Larson is happy to offer a small detail on what we can expect over the first few months of 2017: “We’re going to do a Guardian for the Japanese pantheon, which we’re missing right now. He’ll be our next god,” he details. “And then we’re probably going to go back to the Celtic pantheon and do another god there. We’ve been holding off doing Hindu gods for a while, so we’re also going to revisit them in a big way this year.”

You can play The Morrigan right now by logging into Smite.