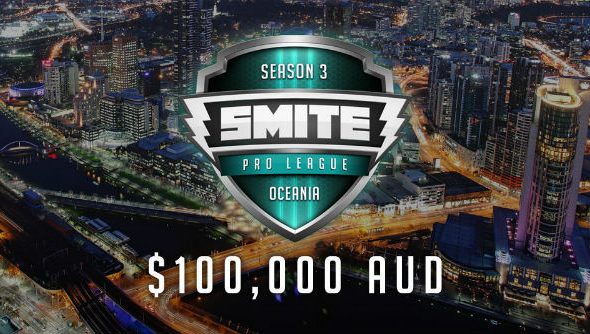 SMITE’s Pro League 2016 eSports series will include the Oceania region later this year. Welcoming teams from Australia and New Zealand, the upcoming competition will see last year’s $65,000 prize pool upped to a healthy $100,000 AUD this time round.

Even if you’re new to the world of eSports, I’m sure you know of LoL’s popularity there. Get clued up with our best League of Legends Champions.

Season three of the Pro League series will kick off on February 27 with the first of two Pro League Qualifiers, otherwise known as ‘Splits’. All told, the $100,000 prize pot will be divided between six teams across three events with the majority of that moolah being kept aside for the CGPL Autumn LAN finals. These will run on April 16 and 17.

“Since introducing the Smite Pro League to the Oceania region last season, we’ve been very excited to see the growth in quality and competitiveness of the scene,” says Hi-Rez’s eSports manager Adam Mierzejewski. “We think the Oceania scene will compete very strongly on the world stage in Season 3.

“With over 14 million players worldwide, Smite continues to grow, and Oceania has been an important piece of the game’s success. Our goal is to create a sustainable eSports ecosystem for Smite in Oceania that can last for years to come.”

Last year, Avant Garde were crowned champions of the Smite Oceania Pro League – a victory which saw them automatically qualify for the Smite World Championships. Alongside 2015’s runners up, Dire Wolves, Avant Garde will receive automatic seeding in this year’s Oceania tourney.

Full details on the Smite Oceania Pro League can be found on the Cybergame site.