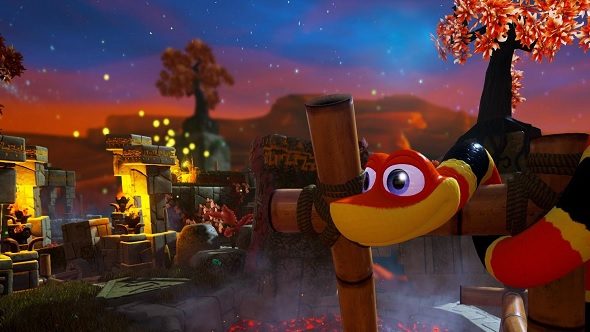 Ahead of its launch at the tail end of March, Sumo Digital have released a new video which goes over the unique control scheme of their physics platformer, Snake Pass. Unlike your standard platformers which have players running and jumping over obstacles, Snake Pass has you slithering around the world and coiling yourself round objects to climb to new areas.

If you’re on the prowl for indie games, check out these great PC indies.

Snake Pass’ control scheme is pretty unique for a platformer, as you have to control the snake’s head and body in tandem to move yourself along. It is a game best played with a controller, as trying to make the snake undulate with mouse and keyboard will probably tie your hands up in knots. The left stick controls the snake’s head, so you can look around and point your body in the right direction. To actually move, you need to hold down the right trigger which stretches out the snake’s body and gets you moving.

However, snakes don’t actually move in straight lines, so you have to keep moving the snake’s head from side to side to gain speed. Once you get the sidewinder motion down, you’ll start slithering along. From there, you just need to press the A Button to make the snake lift his head up. Besides making him look like a cobra, this means you can constrict your body around poles, walls and other vertical obstacles to climb to higher ground.

While those are the three main controls, mastering reptilian movement will take a quite a while. As you have no jump button, it’s a matter of thinking how you can get over gaps without falling to your doom. You can grip onto surfaces with the left trigger, meaning you can tightly coil yourself around a pillar, then slowly extend your body over a gap to stop yourself from instantly falling in.

After explaining the basics, the Snake Pass developers do a quick run through of the game’s first level, showing off how players should approach platforming as a snake. It will take a fair bit of time to retrain your brain but once you do, you’ll be climbing overhangings and poles like a champ. The developers actually liken the control scheme to driving a car, with the right trigger acting like the accelerator, while the left trigger is the brake. Much like driving a car, you need to feather both pedals for trickier manoeuvres as having your foot glued to the gas will get you killed.

Due to the control scheme being so unique, the developers at Sumo Digital are undecided on which movement technique is the fastest. Some say getting the perfect slither rhythm is the fast way to move, others say it’s lifting your head up for a mini corkscrew and then suddenly dropping it for a quick momentum boost. Speedrunners are going to have an absolute field day with this one.