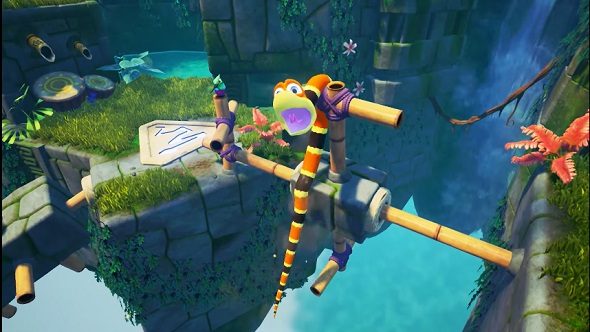 For most platformers, you’re used to seeing a bipedal protagonist who runs and jumps everywhere without any trouble. Even then, there is usually quite a cartoonish physics engine which doesn’t have to worry about how the main character’s legs absorb shock when they land. Sumo Digital have made their physics engine key to their platformer Snake Pass and have recently released a developer diary, going over how they made their snake move realistically.

Learn more about Snake Pass’ development as part of our “Making it Unreal” series.

In the vast majority of games, a character is just a single capsule with an animation rig around it to make it look real. In Snake Pass, the main character Noodle has to move like an actual snake, so having a single capsule control all movement would look quite odd indeed. You can’t have a snake move like a centipede with hard turning angles, so the team at Sumo Digital had to go back to the drawing board to make Noodle slither convincingly.

As they didn’t want to use canned animations, what the team ended up doing was making Noodle out of 35 separate capsules chained together, matching the vertebrae of a real snake. With this, each capsule is given a traction value and reacts to Noodle’s overall shape, resulting in a main character that moves through the environment like an actual serpent would. Each capsule reacts to the ground, Noodle’s general momentum and various other physical forces to roughly emulate the real-life movements of a snake.

With Noodle mostly moving around in grassy terrain, Sumo Digital devoted a lot of time to modelling realistic grass which would react to the movement of a snake. Using the foliage system in Unreal 4 as a base, the physics team designed grass that would actually react to Noodle’s movement through it. Thanks to the linked capsule system, the grass can move based on the forces applied by each individual capsule, making for authentic looking grass. It’s quite impressive to see just how much effort went into making the grass move properly.

You will be able to see what it’s like to be a snake in the grass, when Snake Pass launches on Steam March 28.