Sat on top of a cliff trailing a German officer’s head through my rifle scope I waited for a plane to pass over, a sound loud enough to mask the sound of my shot. As the sound of the plane grew louder I changed my mind, dropped the scope south and fired.

The world slows down as it shows the end of my gun barrel flare and a rifle round flies out the end, quickly crossing the ground between me and the officer. The camera rotates round and I watch in x-ray as the round passes through my new target.

His testicles rupture in slow motion and I’m given an XP bonus for my keen aim.

Sniper Elite 3 aims to be the larger, more intelligent sequel to Sniper Elite V2 but it’s not abandoned what made the series popular.

Here’s Everything We Know. 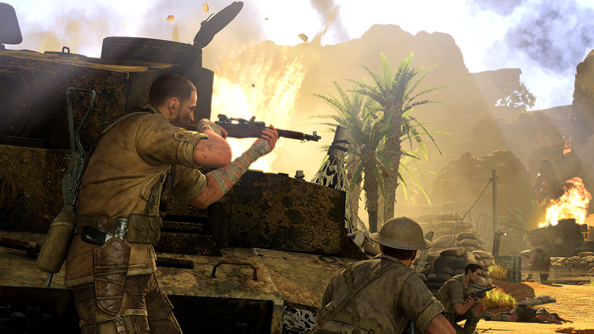 No more of the grey/brown ruined roof spaces of Nazi-occupied Germany for you. , Sniper Elite 3 moves the action to Northern Africa. The campaign laces you into the boots of Karl Fairburne, an American OSS agent embedded with the British forces and on the search for secret Nazi super weapons.

The move sees more than just a change of colour palettes., Rebellion are moving the action out from the cities and into the deserts. This means larger, more open levels where you’re not restricted to street corridors.

The levels in Sniper 3 are more than three times larger than those in its predecessor and Rebellion are making good use of the extra space. Levels are shot through with hidden canyon passes, tunnels, cliffside paths, anything that can get you off the main route so you can sneak past the German troops and get to an overwatch position.

The levels aren’t completely open. There’s still a main route through each mission, making it a largely linear game but you’ve often multiple objectives to complete and there’s some freedom in the order you can complete them.

Sniper 3’s campaign will take you through some of the main locales of the late African campaign, including the coastal city of Tobruk, where German forces besieged the city for almost an entire year, and Egypt’s Halfaya Pass, where the Germans dug in and locked down the route between Libya and Tobruk – extending the siege still further.

In V2 you would scout out an area, sneak into the best position, and fire your opening salvo. Once the action kicked off hunkering down was the best policy, shooting anyone who tried to flank your position. When everyone was dead you would move to the next area and repeat the process.

Rebellion think that’s a little stale. In Sniper 3 the emphasis is on movement., Yyou want to stay ahead of where the AI think you are. So, when you fire a round the AI will fan out and move towards the sound. If you fire a second time, when the enemy already have a general idea of where you are, then they’ll pinpoint you and overwhelm your position. This isn’t like in V2 where the engine could only support eight AI at once, now more than 30 soldiers can be hunting you.

To extend the use of a sniper nest you can mask the sounds of your shots. This was a feature present in V2 but it’s much simpler to use now, with a handy HUD icon letting you know when the noise of your shot will be masked by the sound around you. So long as your victim is out of sight of other AI and the noise around you is loud enough you can shoot nazis all afternoon from the same spot. 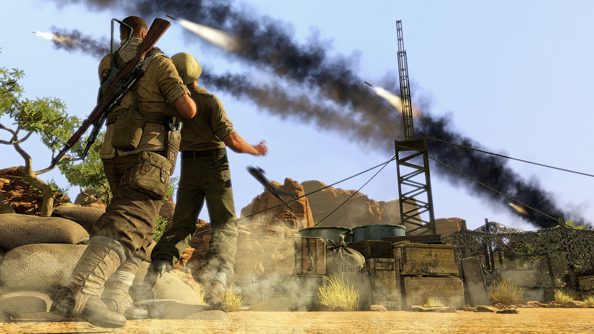 Masking noises can be anything from artillery, planes flying overhead, or the clanking sound of a broken generator.

There’s a new icon on the minimap that shows where the AI think you are, get well clear of that and when the troops reach that spot they’ll stop looking for you.

This is one point where the AI appears weak. It’s silly watching a line of troops reach a spot you were hiding moments before only to throw up their hands and give up the search. What was it that made two holes in their commander’s head? The wind?

Rebellion haven’t forgotten what makes the Sniper games a draw. Whatever you may have thought of Sniper V2, the way it handled ballistics forced you to contemplate your shots. You could be overtaken by a sense of zen calm has you tried to calculate the distance between you and your target, predicting the effect that would have on bullet drop.

You still need to account for wind and gravity in in Sniper 3 but because the levels are larger then the effect these forces have can be substantial. To help, when you hold your breath a handy tooltip tells you where your bullet will land. It’ll even say if the path of the bullet is blocked by anything between you and your target. You can only call up this tooltip when your pulse is below 80 beats per minutes so don’t expect to sprint into a German camp and start pulling off aim-assisted head shots.

I found myself relying on this new gizmo a lot in my time with Sniper 3. Too much, I thought. Luckily, it can be turned off. Plus, in the top difficulty setting lots of the HUD assists are missing, forcing you to learn the game’s systems.

The effects of your shot are better rendered, too. Internal organs are presented in finer detail than before. Bone cracks more accurately, eyes burst more brutally, and brains make the sound of a bucket of trifle being poured onto a tile floor. If you liked V2 for is gore, you’re being well catered for. 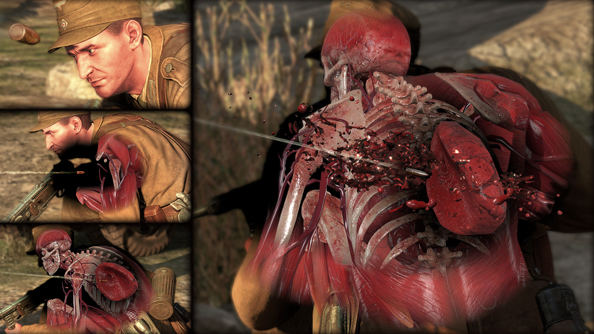 It’s not just human innards but car parts, too, that can be seen tearing a new one. When you pull off a successful shot on a truck engine you’ll watch the bullet pass through all its valves and pistons, followed by a satisfying explosion.

With the new focus on relocating Rebellion have kitted us out with equipment, new and old, that will help us stay alive longer. Land mines and trip wire were in the last game but now you can set traps with them . Tool up your sniper nest with explosives, shoot a couple of officers, sneak off to another spot and watch what happens when the troops come to investigate your old haunt.

A new piece of gear is the flint and tinder. You can use it to start small fires. These can either be used to distract the AI, drawing them away from their patrols, or to light the fuse on explosives. 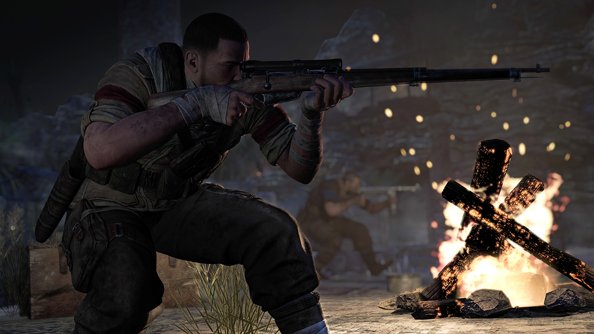 Your binoculars have seen an upgrade. As well as giving you a good overview of a location you can use them to spot weak spots on vehicles and fuel tanks. You can also mark targets, flagging them on your minimap. Marked targets remain visible even when they’re out of your sight line so before sneaking through a camp it’s always a good idea to scope the place out beforehand.

If all else fails you also have some melee moves to fall back on. Sneaking up behind an enemy gives you the option to quietly snap their neck. You can also try and take a swing with your fist if you’re facing an enemy face on but it’s not particularly effective. Especially if you encounter the same bug I did, where no matter how many times I punched at the same person they’d always dodge.

Sniping doesn’t have to be lonely work

The entire campaign can be played in co-op, which will open those maps up further as you look for the best spots to cover an entire area, watching out for soldiers that your buddy can’t get a bead on.

Separate to the campaign there will also be co-op overwatch matches, where one of you has a rifle and the other has to sneak into camps to steal intel – praying your friend isn’t off making a tea instead of covering your advance. You can also set up a survival game where the two of you have to last as long as you can against growing waves of German troops.

Or, if you’re looking for something more competitive, you can take part in 12 player deathmatches.

If you found the Sniper series didn’t fulfil your wish of an Enemy at the Gates-style sniper war, where any flash of movement is met by a bullet… or seven, then the multiplayer deathmatch was the place to go. Here players would sit still for minutes, just waiting for someone to make a mistake.

You’ll be able to unlock new gear with experience earned in multiplayer and in the main campaign, so over time you’ll accrue a wardrobe appropriate for any situation. That will be expanded with future DLC, along with new guns, maps, and missions.

And, unlike V2, multiplayer will be available at launch on 27 June. 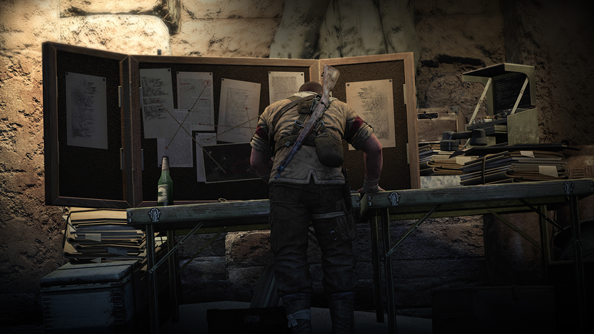 Rebellion have looked at every part of V2 and found ways to improve it, creating options for us to play with. It’s not a wild departure from the previous game but if you’re looking for more World War 2 sniping, this is the best place to get it.

Steve and Rob have both been hands-on with Sniper Elite 3.